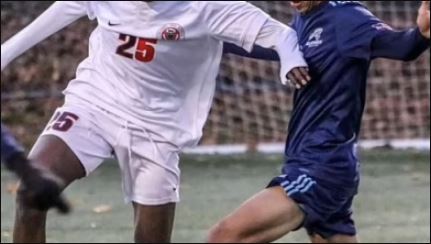 Moussa Fofana became fixated on soccer in middle school, honing his skills at all hours, his mother said. The pandemic may have upended his life in other ways over the past academic year, his third in high school, but it could not dim his passion for the game.

“He took virtual classes all morning, and then played soccer every other hour,” his mother, Hawa Fofana, said. “I don’t think a day went by without him playing.” He was out Sunday night when a friend called to tell Ms. Fofana her son had been shot. She cut the caller off and tried Moussa’s phone using FaceTime. A police officer answered. Moussa, 18, was dead.

“It was like they put cold water over my whole body,” she said. “I was shocked.”

Adding to the shock was the crime’s setting: near the New Jersey soccer field where Moussa distinguished himself as a leading scorer during his high school team’s most recent season. Moussa was one of two students from Columbia High School in Maplewood to be struck by gunfire near the Underhill Sports Complex late Sunday, officials said. The second student, also male, sustained a wound that was not considered life-threatening, officials said.

Although Moussa was a fixture at the complex, which is several blocks from the high school, it was unclear why he and the other teenager were there Sunday night. Officials said that the death was being treated as a homicide and that no arrests had been made. Gov. Philip D. Murphy, speaking on Monday at a regular daily news briefing, called the killing “another case of gun violence in our midst.” Maplewood, a suburban town of about 24,000 residents, is just outside Newark and roughly 20 miles west of Times Square.

On Monday afternoon, yellow police tape lined the fences surrounding the complex, and six bouquets of flowers and a soccer ball left by mourners lay outside a locked gate. With a police vehicle’s lights flashing around them, investigators worked to piece together what had happened the night before, and local residents expressed shock that a fatal shooting had occurred in what they said was a typically quiet neighborhood.

Layla Michaelson, a neighbor and Columbia High School senior, said in an interview that she first met Moussa when she was in the sixth grade and that her family had moved in across the street from him and his family two years ago. Ms. Michaelson, 18, said she often watched Moussa practicing soccer in the street or in his backyard. She said she had seen him earlier on Sunday and later learned of his death online. She sounded stunned that someone would kill him.

“He was always so sweet,” she said. “He never gave problems to anybody.”

Ms. Fofana, who runs a fashion and styling business in Maplewood, said she immigrated to the United States from Liberia in late 2002. Moussa was born in New York and then lived in New Jersey for several years.

She said that she had sent him to live with his grandmother in Monrovia, Liberia’s capital, when he was 5 and that he had moved back to this country six years later. She was on her way to Pennsylvania late Monday to see Moussa’s father and had not told her 5-year-old son, Muhammad, about Moussa’s death, she said. The brothers, she said, were very close.

Robertson Onyiuke, a family friend, said Moussa was both “still a child” and “the man of the house.”

“We’re all still in shock,” Mr. Onyiuke said, adding: “I loved that boy like a son.”

Police officers found Moussa with a gunshot wound shortly before 10 p.m. Sunday near the sports complex after responding to reports of gunfire in the area, according to a statement from Maplewood’s police chief, Jimmy DeVaul, and Theodore N. Stephens II, the acting Essex County prosecutor. Moussa was pronounced dead about a half-hour later, they said.

Dr. Ronald G. Taylor, the South Orange-Maplewood schools superintendent, said in a letter to parents and staff members that the shooting was an “inconceivable calamity.” Suzanne Fein, who was among Moussa’s middle school teachers, described him to the local news website The Village Green as “a student who never went without a thank you and a kind smile, grateful for all who engaged with him.”

Homicides are rare in Maplewood. The most recent was in January when a 70-year-old woman was found beaten to death on the balcony of her apartment. Her son was later charged in the killing. In 2019, the owner of a popular New York City comedy club and a nanny who cared for his two children were killed in his Maplewood home. The nanny’s boyfriend was charged in the killings.