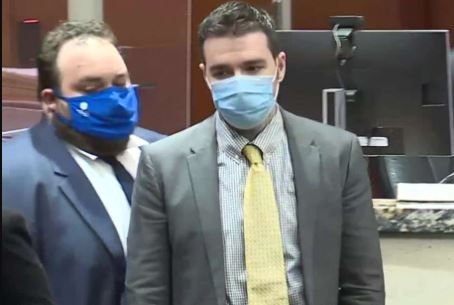 Kylr Yust was sentenced Monday afternoon at the Cass County Courthouse for the deaths of Kopetsky and Runions — two women who disappeared about a decade apart. Their remains were found together in the same wooded area of Cass County in 2017.

Jurors found Yust, 32, guilty in April of voluntary manslaughter in the death of Kara Kopetsky and second-degree murder in the death of Jessica Runions. The sentences handed down Monday are to be served consecutively and reflect recommendations offered by the jury earlier this year.

In arguing for Yust to receive a harsh sentence, Julie Tolle, an assistant prosecutor in Cass County, said Yust for years has shown a “lack of remorse” and “failure to ever accept any responsibility for anything.” She asked the judge that Yust “finally be punished for stealing the lives of Kara and Jessica” and to consider the emotional toll on their families over the years as they sought answers.

“It is every parent’s worst nightmare to imagine their child going missing,” Tolle said. “There were opportunities for over 14 years for this man to come forward and get justice for these families.”

Circuit Court Judge William Collinson Monday denied a motion by Yust’s defense team for a new trial. His lawyers said they intend to file an appeal. They declined to speak with reporters as they left the courthouse.

When asked by Collins whether he would like to make a statement before a sentencing decision was made, Yust declined.

In one tense exchange, Yust refused to answer any questions from Collins about his legal counsel. The family of the victims said after the hearing that Yust showed his “true colors” in those moments. Relatives of the slain women quietly applauded after Yust’s sentence was announced.

Kopetsky, 17, was reported missing in May 2007, and Runions, 21, was last seen alive in September 2016. Yust, 32, had long been linked to both killings early on in the investigations. For months the families of both women searched extensively for their whereabouts. A mushroom hunter found their remains in April 2017 in a wooded area south of Belton.

Prosecutors charged Yust in 2017 with two counts of first-degree murder in the women’s slayings. The jury, which was brought in from St. Charles County because of the case’s publicity, however, had the option of delivering lesser charges.

In court filings, defense attorney Sharon Turlington requested a change of venue, alleging that Collins said that an alternate juror was excused due to be present due to a reason involving HIPAA and the court would not disclose any additional information. However, a defense attorney investigator later contact the juror who told him they missed the bus to Cass County.

“While this was an alternate juror this situation is not harmless,” Turlington said. “In pre-trial motions and during trial the defense asked for an unbiased Judge and to hold the trial in a county that was not prejudiced against Mr. Yust.”

The criminal trial began on April 5. During opening arguments, Cass County Prosecutor Ben Butler said Kopetsky tried to end the relationship with Yust, who admitted to friends that he “‘strangled the (expletive) out of her and threw her in the middle of the (expletive) woods.’”

Yust killed again nine years later when Runions tried to end a relationship with him, prosecutors said. Yust dumped their bodies in “his spot,” Butler said. During the criminal trial, prosecutors characterized Yust as a violent and merciless killer who took the young women’s lives because he could not stand to see either become romantically involved with someone else.

Yust’s defense team, meanwhile, sought to cast doubt on the investigation and its conclusions, arguing that there was no physical evidence to link Yust to the killings. On the last day of the trial, April 14, Yust took the stand, saying he did not kill Kopetsky nor Runions and that he believed his deceased half-brother was involved.

Speaking to reporters after the sentencing Monday, family members of Runions and Kopetsky described a long and difficult path to justice, at times being told the women would never be found. “We’re very thankful for justice to come,” said Jim Beckford, Kopetsky’s stepfather. “We won. We got them back.”