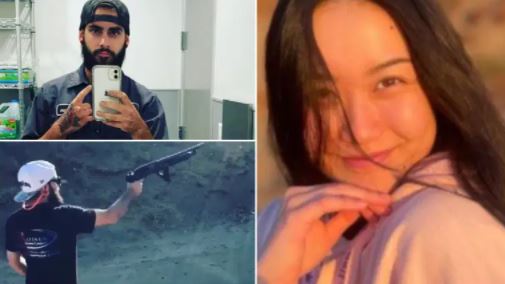 Marcus Anthony Eriz is a car detailer who brandished guns at shooting ranges on his Instagram page; she is the daughter of Taiwanese immigrants who was featured in stories about depression among Asian-American teens. Both have deep California roots.

Aiden’s death has outraged and galvanized the community. The boy was shot and killed on the 55 Freeway in Orange, California. Lee and Eriz were arrested in Costa Mesa, California, on Sunday, June 6, 2021, according to the California Highway Patrol, and they are “expected to be charged with murder,” a news release said.

Authorities have said the boy was randomly shot in a road rage incident provoked by a perceived lane change. The California Highway Patrol called the male suspect Eriz Marcus Anthony in a news release, but jail records and his social media accounts give his name as Marcus Anthony Eriz.

Aiden Was Shot as His Mother Drove

The crime was horrific and random. According to ABC News, Aiden was shot and killed on May 21, 2021, as his mother Joanna Cloonan was “driving him to school.”

The crime occurred in Yorba Linda. Cloonan told ABC News that a white sedan cut her off “abruptly” in the carpool lane on the 55 Freeway. “The arrests follow the May 21, 2021, shooting on SR-55,” the news release from CHP states. “Joanna Cloonan was driving a silver Chevrolet Sonic, approaching SR-22, while her son, Aiden Anthony Leos, was seated in the rear passenger area. Ms. Cloonan and the occupants of a white Volkswagen station wagon were involved in a road rage incident over a perceived unsafe lane change. A shooting occurred when an occupant in the Volkswagen fired at least one round from an unknown caliber pistol into the rear of the Chevrolet Sonic, killing Aiden.”

Aiden was shot in the back seat.

They are expected to be charged with murder. pic.twitter.com/XAocEm2mCA

“They took my son’s life away,” Cloonan told ABC News in an interview on Good Morning America. “He was beautiful and he was kind and he was precious, and you killed him for no reason. And I want to find them and I want there to be justice to be served for my son.”

On Facebook, Eriz called himself a “young welder from a small town tryna figure out how to live in the big city.”

According to the San Jose Mercury News, Eriz and Lee are dating. They are boyfriend and girlfriend. His social media accounts don’t make mention of her, though.

A 2015 news story on KHN featured Lee and spoke about her struggles with depression. That story says she grew up in the San Gabriel Valley’s suburbs, the daughter of Taiwanese immigrants. The article describes how she started missing a lot of school at Diamond Bar High School.

She was one of three children in a tight-knit family; her father worked in manufacturing, and her mother was a stay-at-home mom. The article describes how she attempted suicide by swallowing pills. The article quotes Lee’s journal: “The suicidal thoughts are seeping back here and there by droplets. … Therapy and counseling are so not … helping me either. All we do in these sessions is chat. I’m not feeling any better. I’m still not able to handle this at all. I’m not healing.”

According to KHN, Lee’s mother worked hard to get her help and she was in therapy but accepted that depression and loneliness were a part of her life, saying, “I’ve accepted it as part of who I am.” Her social media accounts are deleted.

She was also listed as a community storyteller in a panel discussion on Obamacare put on by the USC Annenberg Norman Lear center. “These stories included a young woman named Wynne Lee, a student at Diamond Bar High School, who suffered from depression and thoughts of suicide after repeated bullying in school; Lee eventually found help and support through the mental health services offered by the Asian Pacific Family Center,” the story says of Wynne Lee.

Online court records for Orange County do not show a criminal history for Lee or Eriz.

Eriz does have some traffic violations listed in the system, including failure to have insurance, unauthorized driving in an HOC lane, and failure to have a driver’s license.

“While these arrests will not ease the pain of a mother’s loss, my hope is for the Leos family to have some peace of mind and to rest assured the CHP will work with the Orange County District Attorney to bring justice for Aiden,” CHP Commissioner Amanda Ray said in a statement.

Eriz Works as a Car Detailer

According to jail records obtained by Heavy, they list Eriz as a car auto detailer. Redlands Daily Facts says they both work in Highland in San Bernardino County.

On Instagram, Eriz called himself, “Auto body Technician…Welder/fabricator💪🏼 jdm car enthusiast 🔰 Goal Orientated Stay True.” On Facebook, he says he was a “body shop worker” at a Chevrolet dealer who worked at Krispy Kreme and a pizza company, went to Trinity High School, and was from Weaverville, California.

Heavy contacted the California employer Eriz listed on his Instagram page. The manager said he hadn’t worked for the company since the beginning of the year, and he left for a better opportunity. He said that Eriz didn’t seem like he was the kind of person who would do something like the crime reported and the company officials plan to reach out to Aiden’s family in support.

Lee is listed as being unemployed in the records, according to online jail booking records. An old LinkedIn page in Lee’s name also says a person with that name once worked at a waffle and chicken restaurant in Costa Mesa.

Both are being held in the Orange County Jail on $1 million bail. Online records indicate that Lee has long ties to California, extensive family in the area, and an old LinkedIn site in her name indicates attendance for a time at a California university.

“I’m reaching out to the public to help Aidens mother pay for her needs including replacing her car and living expenses while she is not able to work. Six-year-old Aiden was tragically killed in a road rage incident in Orange, CA on 5/21/21 and died in his mother’s arms as the suspect was aiming for her! This is my granddaughter in the photo and Aiden is her brother. Thank you for your loving support,” it reads.

A follow-up message says, “As a family, we are overwhelmed by your generosity & support of Aiden’s mother, Joanna, and his older sister Alexis and on behalf of Aiden’s father during this difficult time. Your support has made them know they are loved & supported. While the Memorial for Aiden tomorrow is only open to family and close friends, please know it is because of your generosity & support that we can give Aiden this beautiful memorial.”