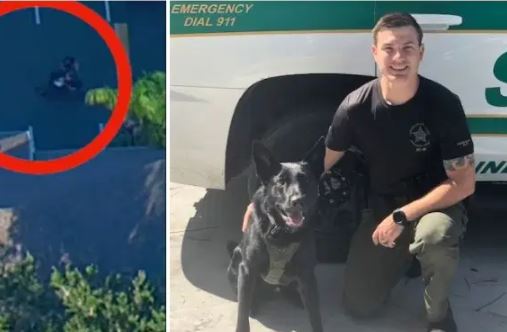 Jacob Curby is a Florida deputy who caught a baby on video after law enforcement alleges the infant’s dad, John Henry James III, threw the baby during a police chase.

The Indian River County Sheriff’s Office shared a video of the pursuit on Facebook and identified the father as 32-year-old John Henry James III. The IRCSO alleged James threw the 2-month-old infant at the deputy following “a lengthy pursuit through the Gifford community” ending at about 6:30 p.m. May 26, 2021. The post announced on June 4 that James faced two felony counts of aggravated child abuse that had just been added to his case.

“You can’t throw a baby at us and expect us to treat you with kid gloves,” Sheriff Eric Flowers said in a statement.

The baby was not injured when police say the father fled police and threw the baby at a deputy. The child is now safe, the Indian River County Sheriff’s Office wrote in a Facebook post.

Officials said the incident began in Vero Beach, when law enforcement attempted to pull James over for a traffic violation. Police allege James fled for 40 minutes before becoming “boxed in” at the Taylor Pointe Apartments.

“As he bailed out of his car, he grabbed the 2-month-old boy who had been in the car with him and threw the child in the direction of a deputy,” the IRCSO said in the post. “That deputy successfully caught the child and was able to relocate the baby to safety. The Department of Children and Families was notified and is handling that portion of the case.”

During the pursuit, law enforcement alleges James “struck the front end of a detective’s vehicle,” “dodged roadblocks” and ran over stop-sticks. Police said in the statement James fled on foot after they say he threw the infant. He kicked and bit at deputies and struggled when being loaded into the back of a deputy’s cruiser,” the statement said.

James’ jail records show he is being held without bail. His other charges include aggravated battery on an officer/firefighter/EMT, battery on the same, reckless driving, and resisting arrest with violence, his booking information indicates. Indian River County comprises of Miami, Fort Lauderdale, and other cities.

Curby described the incident in an interview with CBS 12 and said having a baby thrown at him was toward the top of the list of strange things he has seen on the job. I’ve seen some crazy stuff but this is definitely up there,” Curby told CBS12 News. “It wasn’t a nice underhand handoff from a foot away, it was a throw,” Curby said in the interview his actions were limited because the suspect was holding a baby.

“It was kind of awkward. I couldn’t chase him, I couldn’t tackle him, not a whole lot I can do because he had the baby,” Curby told CBS 12. “He just turned around, no regard, not a little toss or anything, he just turned around, overhand threw this two-month-old at me from about 6 feet away. Curby said during his interview with the news station he was grateful the infant was not hurt.

“He’s just a cute little baby, fluffy hair, had a cute little outfit on,” Curby said to CBS 12. “Luckily we were able to get the baby from him before he did trip and fall, or try to carjack somebody else.”

Curby joined the Indian River County Sheriff’s Office in 2014, according to a Facebook post from the department. As of March 2020, the time of the post, he was a K-9 handler for Bane, a dual-purpose police dog trained in narcotics detection and apprehension, the post said. Before he became a deputy for Indian River, he worked on a boat detail for Treasure Island, the post said.

ICYMI: New video shows a deputy holding a baby who had been hurled to him by a father who led deputies on a wild high-speed chase in Indian River County. Read more: https://t.co/opqSaOWebY pic.twitter.com/xQ6eIaHsT9

The IRCSO Facebook post commended him for his apprehensions with Bane, saying the duo apprehended Timothy Howton-McLaughlin, an “escaped inmate from Okeechobee Correctional Institution,” the post said, and Dennis Keen, who the sheriff’s office said they apprehended fleeing in a stolen vehicle.

“If you happen to see Deputy Curby and Bane during your travels, please thank them for their service to our community,” the post said.