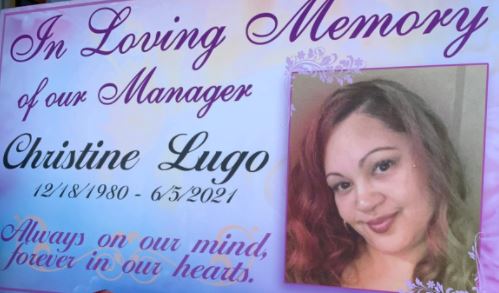 Christine Lugo a manager at a Dunkin’ doughnut shop at Fairhill Street and Lehigh Avenue in North Philadelphia, was unlocking the store’s front door just before 5:30 Saturday morning when a man with a revolver grabbed her and forced his way inside, then shot her in the head after she turned over an undisclosed amount of cash.

The store is usually open 24 hours, offering only drive-through service overnight. But the person who was supposed to work Friday night into Saturday morning called out, assistant manager Terrell Johnson said, which meant Lugo showed up to an empty store, left to open it alone.

Cause of Death – Incident Detail

Lugo was murdered Saturday morning at work while opening a Dunkin’ store on 5th Street and West Lehigh Avenue in North Philadelphia.

“This didn’t have to happen. It didn’t,” said the victim’s son, Christian Lugo.

Johnson, 38, said he often worked the overnight shift and would meet Lugo in the morning when she came to start her day about 5 a.m. She’d text him when she was 15 minutes away, he said, and he’d meet her outside. Johnson didn’t work the overnight shift this weekend because he had been suspended from work due to a “no-call, no-show,” which he said was a misunderstanding.

“It hits me harder than anyone,” he said Sunday of Lugo’s slaying. In a statement Sunday, Dunkin’s spokesperson Michelle King said store franchisees ”are solely responsible for the day-to-day operations of their restaurants, including staffing decisions.”

Attempts to reach the owner of the Dunkin’ where Lugo worked were unsuccessful Sunday. In a statement Saturday, a spokesperson for the parent company called Lugo’s death a “tragic incident” and said “the franchise owner is cooperating fully” with police. It was a killing that shocked customers, neighbors, and other fast-food workers around the city, many of whom came in the intense heat Sunday to visit a makeshift memorial to Lugo that grew outside the Dunkin’ where she died.

A mother of two who had moved to Philadelphia from Boston a few years ago, she was supposed to be visited by her children and grandchildren over the weekend, colleagues said.

“My mom’s goal was to get home, to get home to Massachusetts, to me, my brother, her two grandchildren,” said Frances Rodriguez, Lugo’s daughter, in an interview Sunday with 6ABC. “This is not how I planned to bring my mom home.”

Rodriguez and her brother, Christian Lugo, arrived in Philadelphia after learning of their mother’s death, 6ABC reported. Outside the store, they saw the memorial. Tall, colorful candles burned next to stuffed bears and red balloons. People wrote messages on a piece of poster board; one described Lugo as “my red-haired wonder woman.” A piece of cardboard read: “Protect Women. Protect Workers.”

“It warms my heart, I know it warms my sister’s heart, that she affected so many people,” Christian Lugo said, “because she didn’t have no other family out here, but at least she wasn’t alone.”

The store remained closed and cordoned off by crime scene tape Sunday as police continued their search for Lugo’s killer. They have announced a $20,000 reward for information leading to an arrest and conviction.

A surveillance video released by police Saturday afternoon showed the gunman forcing Lugo into a back room, where she appears to take money from a safe and hands it to him. He pockets the bills and the video stops with a freeze-frame of his face. Police said the man — described as being in his late 30s to early 40s, with a stocky build, mustache and goatee — then shot Lugo and fled the store in an unknown direction.

Lugo was one of 14 people shot, four fatally, in Philadelphia over the weekend since 6 p.m. Friday, according to police reports. Another of the homicide victims was an 18-year-old male shot 13 times late Sunday afternoon in the 1700 block of 68th Avenue in West Oak Lane. Lugo’s death comes in a year on track to be more deadly than 2020, when 499 homicides fell just one short of the total for the deadliest year on record, 1990. According to the most recent homicide data available from the Police Department, 221 people had been killed in the city through Thursday.

Coworkers described Lugo as a kind, generous person who would give people coffee or food if they were hungry but didn’t have any money.

Though managers aren’t meant to open up stores alone, it happens, workers said, if someone calls out or if the store is short-staffed, as many are now. A Dunkin’ store manager who gave only her first name out of concern for her safety, Tatyanna, said she was opening up another store in North Philadelphia alone at the same time Lugo was killed.

Renee Wicker, who works in that other store, too, said opening or closing alone is scary because people do rob these stores, even though there’s not much cash in them. Lugo’s colleagues said less than $300 was in the store she opened Saturday morning. Wicker, 37, said she was terrified working Saturday night.

“You can’t even go out to make a living these days,” she said. “You might die.”

A group of fast-food workers who didn’t know Lugo nonetheless drove out to her Dunkin’ store Sunday morning to mourn her.

They work in a different part of town, in Port Richmond. But they saw themselves in her — a worker who was just starting her shift for the day, opening the store before dawn, when a man showed up with a gun and forced his way in.