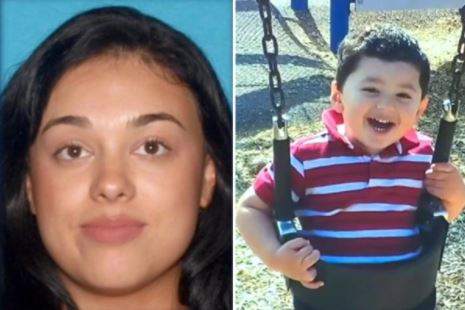 Samantha Moreno Rodriguez is wanted, Authorities have identified the body of John “Little Zion” Doe, found outside of Las Vegas last month as that of a missing boy from San Jose whose mother is now wanted for his murder. Las Vegas Metropolitan Police said Monday the body was identified as that of seven-year-old Liam Husted, who was last seen traveling by car with his mother, Samantha Moreno Rodriguez.

“Over the last 10 days we have put in a tremendous amount of resources,” said Spencer. “We had detectives working through hundreds of leads in an effort to identify the victim … After looking at those photographs, we believed that there was a very good possibility that the missing person case that they were working in San Jose was related to our homicide investigation.”

Rodriguez left San Jose with her son on May 24, traveling first to Southern California and then Nevada, Spencer said. We can place them in the area of Laguna Beach, on the afternoon of the 26th of May,” said Spencer. “Later that afternoon, we know the vehicle was in the area of Victorville, California.”

A hiker found the boy’s body May 28 off State Route 160 near Mountain Springs just west of Las Vegas. Investigators believe his body had been recently placed there and he was the victim of a homicide.

Investigators were tipped off by a family friend that had not seen Rodriguez or her son for some time and saw news coverage of a boy’s body found in the desert.

“The family friend stated that she did not see either Samantha or Liam in over two weeks,” said Spencer. “She saw news coverage from our case here in Las Vegas and saw the composite sketch that was pushed out to the media. After seeing that, she believed that the sketch resembled Liam.”

Police said they sent an investigator to San Jose to collect clothing and a pillow of Liam’s, which they used to positively identify the boy’s body through DNA. Following discovery of the boy’s body, investigators found that Rodriguez continued to travel in the same vehicle.

“Shortly thereafter, on the 29th of May, we discovered that the car was traveling on I-70 near Grand Junction, Colorado,” said Spencer. “The last contact that anyone had seen of Samantha is at a Denver-area hotel room on the 31st of May, when she checked in by herself.”

Police were urging anyone with additional information about Rodriguez to come forward. Liam’s father was not considered to be a suspect in his murder. Police said he reached out to them after he had not heard from Rodriguez or Liam, but that he never thought the boy was in danger.

A woman identified as Shirley Rogers said on a Facebook page dedicated to Liam that the 7-year-old had special needs.

“I will tell you it’s a heartbreaking conversation to have,” said Spencer regarding his speaking with the boy’s father. “This has been an emotional last 10 days for myself, all the investigators that have been working on it. And we’re just glad we’re able to get some closure for Liam and then hold the person responsible for this crime accountable.”

#BREAKING: Police searching for the boy's mother, Samantha Moreno Rodriguez, for his murder. They believe she is in this car. #8NN pic.twitter.com/rxpZHom9B2

A nationwide arrest warrant has been issued for Rodriguez. Police are searching for her vehicle, which is a dark blue 2008 Dodge Caliber hatchback, California license plate 6WLH211.