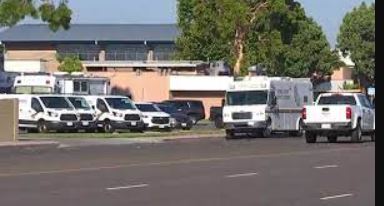 Authorities said they received a call around 8 p.m. about a fight in the 900 block of Park Circle. When the agents arrived at the scene, they found Juan Guizar-Gutiérrez, 39, and Maricela Honorato, 44, with gunshot wounds.

Guizar-Gutiérrez and Honorato were on the sidewalk when they were shot, which is where the officers found them, police told KTLA. The television channel reported that both were hit in the upper body by gunshots.
First responders took action to save lives, but the Long Beach Fire Department pronounced Guizar-Gutiérrez dead at the scene. Honorato was taken to a local hospital, where she died, police said.

Police were called to the scene regarding a fight call. Later, police said the shooting was believed to have occurred outside, and it was not immediately known if the shooting was related to the original fight call. The agents found Guizar-Gutiérrez on the sidewalk with gunshot wounds to the upper part of his body. Honorato lay in the street, being shot in the upper body.

Guizar-Gutiérrez was pronounced dead at the scene. Paramedics took Honorato to an area hospital, where he later died from his injuries. No further details were available, including information on the suspect and the possible motive, Chavarría said.