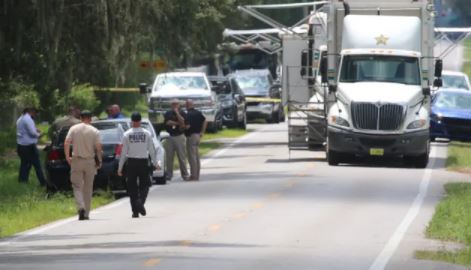 Judd said two separate shootings occurred “in a short time” between police and the suspect, Bryan Riley, 33, of Brandon, Florida. Riley was shot once and surrendered shortly after, he said. Lakeland police and Florida Highway Patrol officers also participated. No law enforcement officer was injured in the shooting.

After Riley was taken into custody, police discovered an 11-year-old girl who had been shot “multiple times,” as well as a man, two women and a baby dead. Judd said Riley was a veteran of the Marine Corps and served in Iraq and Afghanistan. He spent four years in the Corps before being honorably discharged. He then spent another three years on the reserves.

The suspect’s name is Bryan Riley, 33, according to the Polk County Sheriff’s Office. He lived in Brandon with his girlfriend of four years. It was a former US Marine. According to PCSO, when they approached the scene, they found an individual “fully equipped in body armor and appeared ready to engage us in an active shooter situation,” the sheriff said. from Polk County, Grady Judd.

An agent on another call began hearing gunshots and responded, and multiple callers to 911 began reporting an active shooter. Lakeland Police and Polk County Sheriff’s Deputies responded and discovered a burning truck and a man in full armor. Police saw the man running into a house and then heard gunshots, followed by a screaming woman and baby.

Officers entered the home and the suspect opened fire. Officers returned fire before the suspect surrendered. Judd said the suspect had been shot and taken to Lakeland Regional, where he attempted to grab an officer’s gun. Inside the home, officers discovered a man, woman and baby shot to death. The baby was in the mother’s arms. An 11-year-old girl had been shot seven times. She was taken to Tampa General and taken to surgery. She is expected to recover. Agents discovered another woman dead in a house separate from the property.

Judd said the suspect describes himself as a “survivor” and told officers that he used methamphetamine. Judd said the man also made statements like, “You know why I did this.”

Agents identified the suspect as Bryan Riley, 33. Agents said Riley was a United States Marine who was a sniper and was deployed to Iraq and Afghanistan. He is employed by ESS as a bodyguard and lives in Brandon. Judd said Riley had no criminal record. Officers spoke with his four-year-old girlfriend, who told them she had post-traumatic stress disorder and depression.

Riley’s girlfriend said a week ago, he made security at a church and came home and said he could talk to God. Throughout the week he was shopping for supplies to relieve Hurricane Ida. She said that he became more erratic during the week, but that he was not violent.

Early Sunday morning, he returned and slaughtered the family, Judd said. The victims were identified as 40-year-old Judge Gleason, a 33-year-old white woman, a 3-month-old white man and a 62-year-old white woman. Gleason’s relatives gave permission for his identity to be released, but loved ones of the other victims have requested not to be identified.

Officers said Riley also shot and killed the family dog. The dog was named after him from the Polk County Sheriff’s Office K-9. Judd called Riley “evil”, sharing that Riley said, “They begged for their lives and I killed them anyway.” Judd said that Riley has tried to claim that he is mentally ill, but Judd claims that he “knew exactly what he was doing” and was playing “word games” with the officers.

“Just because he has mental health problems does not mean that he is not criminally liable. He is criminally liable,” he said. “There are millions struggling with mental health who don’t do this.” “He’s wicked in the flesh,” Judd said. “A rabid animal. Lakeland Police Deputy Chief Sam Taylor called the shooting scene” horrifying. “Judd said it was” absolutely amazing “that no officer or officer was injured.

“I can never stop seeing that mother laying there with her dead baby in her arms,” ​​Judd said, calling it one of the three worst things he had seen in her career.