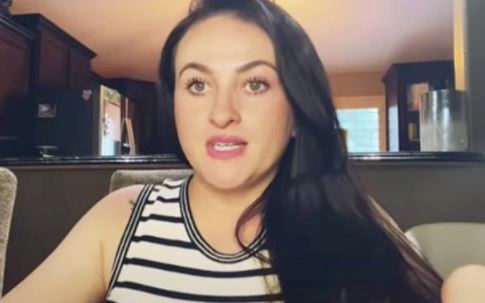 Casey Garcia is a Texas mom who said on YouTube videos she was posing as her 7th grade daughter at her school to reveal security threats. The act led to her arrest, El Paso County Jail records show.

Garcia posted three videos on YouTube including a video to document her experience posing as her 13-year-old daughter, a video explaining why she did it and a video documenting her arrest. While Garcia did not name the school in her videos, the El Paso Times reported the 30-year-old mom posed as her daughter at the San Elizario Independent School District. Officials in the school notified the El Paso County Sheriff’s Office that Garcia posed as her daughter at school Tuesday, June 2, 2021, the newspaper reported.

“I’m proving a point that this is with all school systems, private school, public school, it doesn’t matter. We have a problem. There have been one too many mass shootings in schools,” Garcia said on her video.

Teacher Caught Her at the End

Garcia documented her experience at the school, beginning with a 6-minute video showing her transformation from 30-year-old mom to middle school student, an explainer of why she posed as her daughter, and a video showing her arrest. Her YouTube video, “Going to school as my 13-year-old daughter,” had about 283,000 views four days after it was posted.

“The fact that the teachers didn’t notice scares me, this would’ve never happened when I was in school,” one person wrote in the comments. “All the teachers knew each of their students. This woman went a whole day without being noticed by adults, if the children could spot her and the differences between her and her daughter, then the adults should’ve been able to as well!”

Garcia opened her video filming herself in her daughter’s outfit, which included a Spider-Man hoodie, skinny jeans and a mask. She also said she used self-tanning lotion and dyed her hair to better impersonate her daughter. She entered the school and said “hi” to staff members as she walked inside, her voice shaking. She later said she was lost in the school building.

“Oh my goodness. I am gonna to get so caught. I am actually really scared now,” she said on the video.

Several people talked to her throughout the school day, including a coach who asked who she was, and other students. One student said she knew she wasn’t Julie, Garcia’s daughter, because Julie is taller.

Garcia was discovered at the end of the day and sent to the principle’s office, she said on the video.

Garcia said on her video, “Why I posed as my 13-year-old daughter. A raw but real answer” that she attended all seven periods of her daughter’s school day before she was caught.

“I think the deal breaker for me was actually walking in and posing as a seventh-grader. I mean, I’m no spring chicken, but it wasn’t hard. And I made it to all seven periods, until the last teacher, she was female, and she said, ‘Julie, can you stay after class?’ And I said absolutely. She looked at me and she (said), ‘You’re not Julie,’” Casey said.

Garcia said the teacher was “mind boggled” and asked why she did it. She responded that it was “for a social experiment.”

She said she thought that taking her mask off to eat lunch would be “the deal breaker,” but she was not caught.

She was nervous throughout the day, saying she had trouble breathing and felt nauseous.

“I stayed because look, no one noticed I was there. That is a problem,” she said.

Garcia’s El Paso County Jail records show she is a tiny woman – 4-feet 11-inches tall and weighing 105 pounds. Her size may have made it easier for her to pass as a teenager especially when wearing a mask, which she said on her YouTube video she was wearing for most of the day.

Garcia was charged with tampering with government records and criminal trespass, her jail record shows. Her total bond for the two charges was set at $7,500. A surety bond was posted on her behalf, and she was released. She was booked into the jail Friday, June 4, 2021, and released later that day.

Law enforcement said on the video of Garcia’s arrest that she was being arrested on a traffic warrant. She told them she had never been arrested before and asked them what to do, repeatedly saying she was not resisting arrest. She later asked who sent them to arrest her and asked if they had seen her YouTube video.

Garcia described her experience posing as her 13-year-old daughter, and said that she was allowed inside after she was asked for her ID number and after a staff member asked whether she had signed in. She claimed the staff members were more concerned about her using her phone than about who she was.

Garcia continued, saying that she was the only student in one of the classes attending in person.

Garcia did not blame her daughter’s teachers or any staff members throughout the school district on her YouTube videos. She repeatedly apologized to the school, and refused to say on the video which school she attended as a fake student. But, she said, security problems are pervasive throughout school districts.

“I didn’t do this for any other reason but to prove a point,” she said.

She later said that she thinks whether or not others agree, they will understand.

“I bet you anything someone else can do this,” she says in the video. “This is why I did this — whether you agree with me or not.”

Garcia Said She Thinks She Proved Her Point

Garcia said she wants to put an end to violence at schools. Metal detectors are necessary, and backpacks are not, she said. Garcia addressed her critics, and said people should be more concerned about the problems she was attempting to highlight, such as school shootings.

“Are you more concerned that I, a parent, was sitting next to your child or do we really want to wait for the next person taking their Second Amendment right to the extreme?” she said.

She said that if her actions make a difference, it is all worthwhile.

“This has gone way too far and my integrity is definitely being put into play, so might as well just … God gave me a strong personality for a reason. Here it is,” she said.

“I exposed the dangers of our schools and I am trying to protect my children and yours,” she continued. “If you want to come after me for that, there’s really nothing else I can say.”