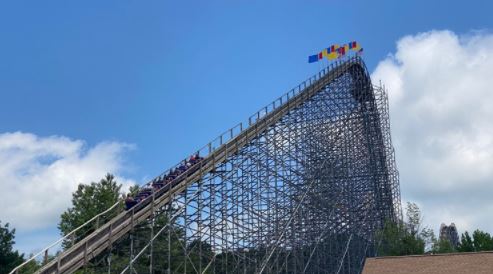 Dawn Jankovic of Brunswick, Ohio, was declared dead at Memorial Hospital in Jasper, Ind., Friday night, according to officials. Jankovic was aboard The Voyage coaster at Holiday World when she lost consciousness, the park said in a statement Saturday.

An Ohio woman has died after she was found unresponsive on a roller coaster at Holiday World on Friday and was rushed to a nearby hospital.

According to Holiday World, the woman had been riding the Voyage roller coaster when she returned to the station unresponsive at the end of the ride. Holiday World EMTs arrived three minutes later, the park said, and immediately began rendering first aid.

The Voyage was fully inspected following the incident but Holiday World said the ride was determined to be operating as intended. The ride was closed, however, for the remainder of the evening out of respect to the family of the deceased.

“Holiday World & Splashin’ Safari officials ask for your thoughts and prayers for the Guest and her family, as well as for Team Members who were on site,” the park said in their online statement. Shuck said an autopsy had been completed, but the results were pending as of Saturday evening.