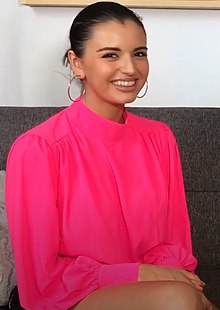 Rebecca Renee Black (born June 21, 1997) is an American singer and YouTuber. She gained extensive media coverage when the music video for her 2011 single “Friday” went viral on YouTube and other social media sites. “Friday” was derided by many music critics and viewers, who dubbed it “the worst song ever”. Black went on to release other songs including her Dave Days collaboration “Saturday”. She currently uploads videos on her YouTube channel about various topics. She has released two independent extended plays, RE / BL (2017) and Rebecca Black Was Here (2021).

Black was born in Irvine, California. She is the daughter of John Jeffery Black and Georgina Marquez Kelly, both veterinarians. Her mother is a Mexican emigrant, and her father, originally from Iowa, is of English, Italian, and Polish descent. Black attended private school from kindergarten to 6th grade, and moved to a public school due to bullying. She joined the school’s musical theater program, where she felt she was “meant to be”. In April 2011, Black dropped out in favor of homeschooling, citing both a need to focus on her career and a desire to avoid taunts from her former classmates. Black has said that she was also failing English class due to her busy schedule.

On April 3, 2020, Black came out as queer during an episode of the Dating Straight podcast.