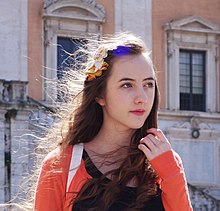 Rebecca Anne Flint (born 5 June 1995), better known by her stage name Beckii Cruel, is a Manx businesswoman, YouTuber, singer, and dancer from England. In 2010 she reached popularity in Japan after her YouTube videos of her dancing to dance pop songs were posted around the Internet. She was the 17th most subscribed user (3rd most in the Musician category) in Japan on YouTube as of 25 August 2010. Her YouTube account has reached 20 million upload views and over 100,000 subscribers. In March 2019, she co-founded Pepper Studio, an influencer marketing agency in London.

Flint was born in Blackpool, Lancashire, England, the daughter of a police inspector and a former dance instructor. She moved with her family at the age of 2 to Ramsey on the Isle of Man, where she attended Ramsey Grammar School. She became interested in anime and manga at the age of 11, when she first started reading Fruits Basket.

On 22 July 2007, Flint began a YouTube channel under the name “xBextahx” (from a nickname she had when she was younger). On 15 April 2009, she posted a video of herself dancing to “Danjo”, a song by Taro that was turned into an Internet meme in Japan. Her YouTube video was uploaded to Nico Nico Douga, where she instantly attracted fans. Flint signed onto a talent agency, Life Is So Cruel, Ltd., in August 2009. Emerging under the stage name “Beckii Cruel” she flew to Japan, where she was able to perform with Taro in Akihabara. Although Cruel had experience in dancing, having taken ballet for most of her life, she was required to undergo vocal training. She began seeking advice from David Holland, an agent who also worked with Samantha Barks.

In October 2009, Cruel visited Japan and formed a group called the Cruel Angels, with 18-year-old French college student, known by her stage name Sarah Cruel, from Lyons, and a student from Portsmouth known by her stage name as Gemma Cruel. Her group was signed onto Tokuma Japan Communications, where they released their first single, “Tsubasa o Kudasai” (翼をください), on 10 February 2010.

Beckii appeared in an online campaign for Lotte Fit’s in November 2009. On 4 November 2009, Cruel herself released two songs on two different albums, titled “No, Upper Matsuri” (の、アッパー祭, No, Appā Matsuri) and “No, Ballad Matsuri” (の、バラード祭, No, Barādo Matsuri) as part of the “No, Matsuri” (の、祭り) CD series which features other singers popular from the Japanese Nico Nico Douga Video community. On 9 December, she released her first idol DVD, titled This is Beckii Cruel!. It debuted at number 8 on Japan’s DVD charts.

On 12 August 2010, BBC Three premiered a documentary about her, entitled Beckii: Schoolgirl Superstar at 14. As of September 2010, Cruel was no longer affiliated with the Cruel Angels, or with the Cruel Angels Project, citing a dispute with her management as the reason for her departure from the project.

In 2021, Flint was a recipient of Forbes 30 Under 30 Europe: Media & Marketing and appeared on the “How to earn a living on social media” episode of The Media Show on BBC News/BBC Radio 4 with Sam Yam, Kaya Yurieff and Chris Stokel-Walker.