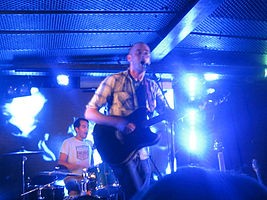 Peter Alexis Shukoff (born August 15, 1979), best known as his stage name Nice Peter or Bluesocks, is an American comedian, musician and Internet personality. A self-described “Comic/Guitar Hero”, he is best known for the comedy on his YouTube channel, NicePeter, and especially for the comedic series Epic Rap Battles of History which he co-created with Lloyd Ahlquist (“EpicLLOYD”) . As of June 8, 2016, NicePeter has over 2.6 million YouTube subscribers.

The day after hitting one million subscribers, the video game channel G4 crowned Nice Peter the King of Dot Comedy on Attack of the Show. His two channels, Nice Peter and Epic Rap Battles (ERB), have a total of over 17 million subscribers and 4 billion views as of February 2019. He also has a third channel that he uses for vlogs and “Monday Shows”, a show that he uploads on either Mondays or Tuesdays consisting of different segments including “Viewer Mail”, “Twitter Question Time”, and “Ask a Giraffe”. They have been featured on the Huffington Post, Billboard.com, Forbes and the January 2012 issue of Wired.

Shukoff was born in Rochester, New York to a Russian father and an American mother. He has 2 sisters. As a child, Shukoff would often Irish dance for his class. Shukoff graduated from the School of the Arts in 1997 and attended Fredonia State University, where he majored in education and history. He originally planned on becoming a history teacher, but the plan did not work out. He later became a birthday party magician. Shukoff learned to play guitar before he had finished school, but spent a time pursuing a comedic career. Once settled in Chicago, he began playing live in bars and comedy clubs in the area, where he met Lloyd Ahlquist, his future partner.

Shukoff has explained that although he was initially more active on social media, his social media usage decreased as he felt it was artificial. He explains that his baldness helped him realize this.

Epic Rap Battles of History is a comedic music video series created by Peter Shukoff and Lloyd Ahlquist. Ahlquist and Shukoff met at a house party in Chicago organized by an improv group that Ahlquist was a part of. The series features historical and popular fictional and real-life figures battling each other through the medium of rap. Battles have included “Darth Vader vs. Adolf Hitler”, “Abraham Lincoln vs. Chuck Norris”, and “Miley Cyrus vs. Joan of Arc”. Some episodes use characters that are fictional, whether it be television or movie characters, as seen in “Rick Grimes vs. Walter White”.

Others use comic book characters, as seen in “Goku vs. Superman”. Episodes typically consist of Nice Peter and EpicLLOYD rapping against each other in character, but sometimes feature guest stars in addition to or replacing Shukoff and Ahlquist. Occasionally, the pair appear in non-speaking background roles, as in the episodes “Cleopatra vs. Marilyn Monroe”, “Gandhi vs. Martin Luther King Jr.”, “Miley Cyrus vs. Joan of Arc”, and “Michael Jordan vs. Muhammad Ali”.[21] Shukoff and Ahlquist also contributed a rap battle to the film The SpongeBob Movie: Sponge Out of Water and performed it with Matt Berry. Shukoff also made a cameo appearance as a surfer dude in the film. He also did additional voices for film The Mitchells vs. The Machines.