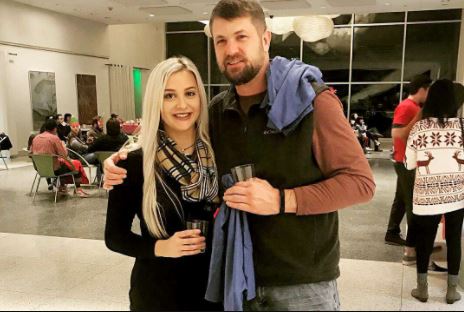 Jason McIntosh the firearm back two weeks before the deadly Nov. 30, 2019, domestic incident, according to NBC News. The reversal came despite pending domestic violence charges against McIntosh, and active protection order from his estranged wife, Megan Montgomery, the report said.

McIntosh, 46, pleaded guilty to murder in March and was sentenced a month later to 30 years behind bars in a deal that avoided the death penalty. Authorities said that McIntosh frog-marched 31-year-old Montgomery out of a bar in Mountain Brook and drove her to a parking lot where he beat and shot her.

The fatal incident was not the first time that McIntosh had shot his wife. In February of 2019, Montgomery was reportedly rushed to the hospital with a gunshot wound in her arm, telling doctors, “he shot me.”

McIntosh resigned from the Hoover Police Department following the incident, and Montgomery declined to file charges. The two were wrestling over his handgun, and investigators found Montgomery to be the aggressor, AL.com reported.

Alabama Law Enforcement Agency Special Agent Vince Cunningham interviewed Montgomery, who told him “she was afraid,” according to the report filed by the organization and obtained by NBC. Cunningham took McIntosh’s gun as evidence and Montgomery filed a restraining order.

Then, on May 5, police responded to a violent domestic dispute that left Montgomery with broken ribs and arrested McIntosh, according to the report. By the fall, Montgomery had moved out and filed for divorce. Meanwhile, McIntosh was repeatedly texting Cunningham to ask for his gun back for a new private security job — and the agent obliged, the article said.

The Montgomery’s family’s “worst fears” were soon realized, as McIntosh used the returned weapon to kill her 16 days later. We talked to her about it,” her mother Susann Montgomery-Clark told NBC about McIntosh’s violent temper, “but we didn’t know how bad it was.”

“So the restraining order can prohibit him from ‘contacting, phoning, texting, harassing, stalking,’ but oh by the way, you can have a gun? That’s ridiculous,” said Montgomery-Clark reportedly said. She knew if she left [him], she would be killed. McIntosh’s own lawyer expressed shock to the news network that he got his weapon returned.

“In my opinion it was irrational, illogical and not prudent to do so,” attorney Tommy Spina told NBC. Without the gun, “I don’t think what happened that night would have happened that night,” Spina reportedly said. Missing from the ALEA summary was a 13-minute recording between the couple that Montgomery’s lawyer submitted where McIntosh spoke about his urge to beat his wife to death with a tennis racket and stand over her body saying “laugh now, bitch,” the article said.

In a statement to the network, Alabama’s top law enforcement agency defended its actions. “The gun was Mr. McIntosh’s personal property, the investigation was closed, and ALEA had no legal justification for keeping his private property. Additionally, the restraining order did not restrict Mr. McIntosh’s access to firearms. If the gun had been a department-issued service weapon, ALEA would have returned it to the department.”

However, Alabama law reportedly says no person “who is subject to a valid protection order for domestic abuse … shall own a firearm or have one in his or her possession or under his or her control. A national anti-gun violence advocate said most states do not track abusers and take their guns, according to the report.

“The laws say this person shouldn’t have a gun period,” Lindsay Nichols, federal policy director at the Giffords Law Center told NBC Domestic abusers who have access to guns are five times more likely to shoot and kill their partners, according to research funded by the Department of Justice.

In 2019, 964 women were shot and killed by domestic partners in the US, which was almost five times more than the number of people that died in mass shootings that year, the report said.