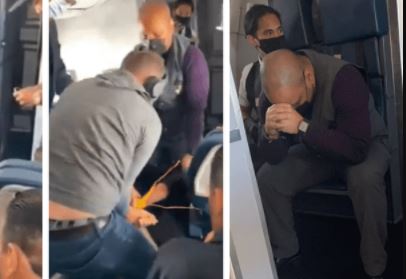 Christopher Williams‘ identity was revealed by a woman named Jessica Robertson, who was on the flight and later posted a number of clips and photos from the incident. Robertson, who is a chief content officer for TOGETHER, and was seated in the third row of the flight, took to social media to share her experience.

She called the situation “terrifying,” but said flight attendant Christopher Williams “acted quickly,” to get the situation under control. “Flight attendant Christopher Williams acted quickly. So did several passengers around me,” Robertson wrote, and the video she took showed people dragging the man to the back of the plane and away from the cockpit.

“He kept banging on the flight door,” the flight attendant who subdued the man said in one of the videos posted to social media. “That’s a no-no. The second he banged on the door, it was a wrap.”

One of the videos showed Williams wrestling with the man, whose face was not seen as he was hidden behind a row of seats and out of view of the camera. Another video showed Williams successfully putting his hands behind his back and tying them with zip-ties. One other showed the man repeatedly screaming “stop this plane” as Williams and two other men near the cockpit struggled to subdue him physically and hold him down on the floor.

Later on, a photo posted by Twitter user @NoKapRich after the encounter shows Williams sweating with his face buried in his folded hands. “@Delta this man needs an award.. just saved the plane. LA flight to Nashville..” the photo was captioned.

A Delta Airlines flight to Tennessee was forced to land in New Mexico on Friday after an unhinged passenger reportedly tried to break into the cockpit. The plane from Los Angeles was diverted to Albuquerque, where it landed at around 2:20 p.m., according to local station KOAT-TV.

The suspect was taken into custody and the aircraft then continued on to Nashville, according to the report. No one was injured. The passenger was not successful. The plane landed safely and the passenger was removed by police and the FBI. He is in custody now,” Delta said in a statement to the station.

A woman named Jessica Robertson tweeted more than two minutes worth of footage of the hogtied suspect being restrained at the front of the plane. The man can be heard crying out “you gotta stop this plane” at least 25 times in a row and with increasing urgency — as three men near the cockpit hold him down on the floor.

“This was our view from the 3rd row right after the @Delta attendants and passengers apprehended the person who attempted to get into the cockpit,” Robertson wrote. “He was screaming ‘Stop the plane.””

The perpetrator flew into a rage on the June 4 flight and allegedly tried to break into the cockpit, when the plane was mid-air, screaming “Stop this plane!”. Flight attendant Christopher Williams and the passengers restrained him with zip ties, according to a number of videos that have been uploaded on social media. Delta Flight 386, where the incident happened, was diverted to Albuquerque, where it landed at around 2.20 pm. The man was arrested by airport police and nobody was injured in the incident, KOAT-TV reported.

Delta released a statement about the incident that said, in part: “Thanks to the crew and passengers of Delta Flight 386, LAX to Nashville (BNA), who assisted in detaining an unruly passenger as the flight diverted to Albuquerque (ABQ). The aircraft landed without incident and the passenger was removed by law enforcement.”

The FBI was said to be investigating the incident. Delta also added that the rest of the remainder of the passengers were expected to make it to Nashville about five hours late. At the time the FBI field office in Albuquerque tweeted that the agency responded to the airport in New Mexico and there was no threat to the public.