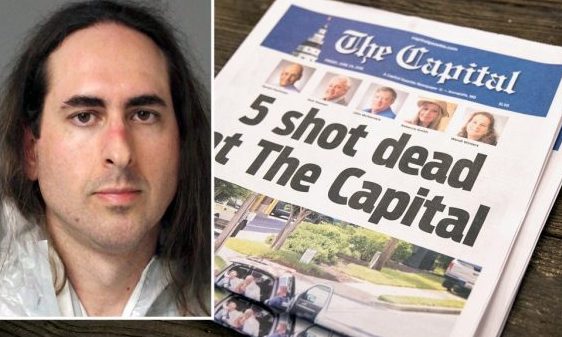 An Anne Arundel County judge sentenced Jarrod Ramos, 41, who in July was found criminally responsible for gunning down five workers in the newspaper’s newsroom on June 28, 2018, with the intention of killing as many people as possible. The gunman who killed five employees of the Capital Gazette newspaper in Maryland in 2018 was sentenced Tuesday to more than five life sentences without the possibility of parole.

Ramos, who claimed that he was not criminally responsible for the murders when pleaded guilty to all 23 charges he faced in 2019, had used the Maryland version of an insanity statement, but a jury dismissed that claim in July after deliberating for less than two hours. Prosecutors said Ramos, who wore a black mask in court, acted in retaliation against the newspaper after he published an article about his misdemeanor conviction for stalking a high school classmate in 2011.

Ramos filed a defamation lawsuit against the Capital Gazette the following year, but the filing was thrown out. Prosecutors said Ramos planned the attack for years, eventually carrying out the plot and killing Wendi Winters, John McNamara, Gerald Fischman, Rob Hiaasen and Rebecca Smith with a shotgun. Later, Ramos called 911 and identified himself to the police.

Anne Arundel County Judge Michael Wachs handed down the sentence in one of the worst attacks on American journalists in history, noting that Ramos was an unrepentant killer who told a state psychiatrist that he would commit more murders if he was ever released. . “The impact of this case is just immense,” Wachs said. “To say that the defendant showed callous and complete disregard for the sanctity of human life is simply a gross understatement.”

Ramos declined to speak in court Tuesday, but survivors of the shooting and relatives of the five victims spoke out about the attack. “The day he died was the worst day of my life,” Montana Winters Geimer, Wendi Winters’ daughter, told Wachs. “The hours I spent not knowing if I was alive or dead have lived in my nightmares ever since.”

Selene San Felice, a reporter who hid under a desk during the shooting, also recalled the Annapolis newsroom massacre. “There were days when I wondered why I lived or if I should live,” he said, according to the Washington post. “I live to spread the truth … We will move on.”

During Ramos’s trial, his attorneys claimed that three mental disorders fueled his fixation against the Capital Gazette, but prosecutors said he plotted the attack after failing to remove the 2011 article. Ramos previously told Wachs in a letter that he did not “wish to litigate anything else” after his request for an earlier sentencing date was denied last month, the Washington Post reported.