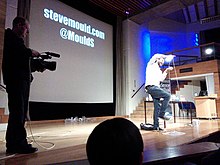 Steve Mould (born 5 October 1978) is a British educational YouTuber, author, and science presenter who is most notable for making science-related educational videos on his YouTube channel.

Mould was born on 5 October 1978 in Gateshead, United Kingdom. He went to St Thomas More Catholic School, Blaydon, before going on to study physics at St Hugh’s College, Oxford.

In 2014, Mould co-hosted ITV’s I Never Knew That About Britain alongside Paul Martin and Suzannah Lipscomb. He has also appeared as a science expert on The Alan Titchmarsh Show, The One Show, and Blue Peter.

Mould’s YouTube video on rising self-siphoning beads, in which he demonstrated the phenomenon and proposed an explanation, brought the problem to the attention of academics John Biggins and Mark Warner of Cambridge University, who published their findings about what has now been called the “chain fountain” in Proceedings of the Royal Society A. Warner has referred to it as the “Mould effect”.

Mould lives in London with his wife Lianne, a linguist, and their children.