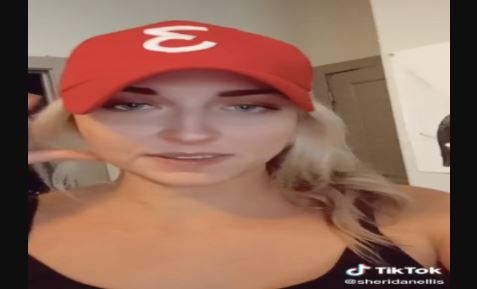 “This weekend on Saturday I went to dinner with a group of friends for this girl’s birthday,” Sheridan Ellis says in the recent clip, which has been viewed more than a million times and has received almost 190,000 likes. If you know me I don’t normally carry a purse, but on Saturday I did because we had decorations and stuff for the table,” Ellis explains.

“At the end of the night, I’m cleaning my purse out and I find this. If you don’t know what this is, it’s a Tile. It’s basically a tracker, people put it on their keys and whatnot,” she says. It’s not mine, I don’t know how it got in my purse. I immediately took the battery out, don’t worry but yeah … Check your purses and stay safe out there,” she adds in the chilling “PSA,” or public service announcement.

In the comments, Ellis said she found the device — designed to help u, according to Newsweek.

She said she hasn’t reported the incident to police because she didn’t know when the Tile was slipped into her bag, adding that she didn’t want to reinstall the battery. TikTok users were quick to offer the young woman advice.

“Set up a sting operation! Put the tile on one of your huge male friends’ doorstep and monitor it with their Ring doorbell! Free 24 hour surveillance!” one wrote.

Sheridan Ellis hasn’t reported the incident to police because she didn’t know when the Tile was slipped into her purse. “The police can definitely find out who purchased that and who downloaded the app registered to it. Go to the police. That is very scary,” another viewer said.

A third wrote: “OMG! I have pre/teen girls. Thanks for putting this out there. But seriously, how many more things do we have to be aware of?!”