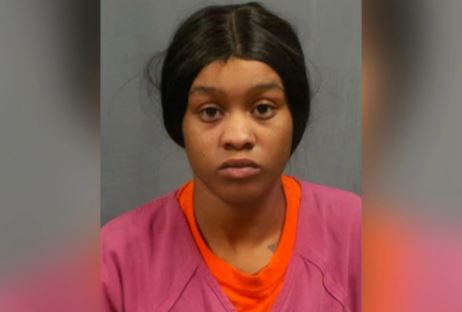 Shanyka Fouche was a passenger in a Ford Fusion driving along I-55 in Jefferson County on Saturday when she opened fire on a Nissan Pathfinder with two adults and four children — ages 2 to 11 — inside, St. Louis Today reported Monday.

Fouche’s own 2-year-old child was in the car with her when she fired the three rounds around 3 p.m., the newspaper reported. The children in the victim’s car were not harmed, but a 32-year-old man in the Pathfinder’s passenger seat was struck in the leg.

The family pulled over and called 911. The Fusion, which was being driven by another woman, sped off but was pulled over by Missouri State Police about an hour later and Fouche was arrested, the outlet said.

A 22-year-old Tennessee woman was charged over the weekend after authorities said she fired a gun at another car while traveling along Interstate 55, striking a man in the hip, Jefferson County prosecutors said Monday.

Shanyka of Memphis, was charged Saturday by the Jefferson County Prosecuting Attorney’s Office with first-degree assault, unlawful use of a weapon — shooting from a motor vehicle resulting in injury, two counts of armed criminal action, attempted assault, and five counts of endangering the welfare of a child.

Fouche was a passenger in a Ford Fusion driven by another woman on I-55 on Friday afternoon when they were involved in a road rage incident with a Nissan Pathfinder driven by a 31-year-old woman and occupied by a 32-year-old man, according to a probable cause statement filed by the Missouri Highway Patrol.

Fouche’s 2-year-old child was in the Fusion and there were four children inside the Pathfinder, ages 2, 3, 8, and 11.

As the Fusion passed the Pathfinder on the right, Fouche fired three shots from a handgun, the probable cause statement said. All three struck the Pathfinder: one hit the rear right tire, causing it to deflate, and two rounds hit the right front passenger door. One of those bullets went through the door and struck the 32-year-old man, according to police.

The Fusion fled the scene northbound on I-55. The driver of the Pathfinder pulled over and called 911 and the man was treated for injuries that were not life-threatening, authorities said.

Hours later, the Fusion was stopped by Creve Coeur police on Interstate 270 south of Olive Boulevard in St. Louis County. Police found the gun in the car, according to the probable cause statement, and the women were taken to highway patrol regional headquarters, where Fouche admitted to firing at the Pathfinder. Fouche was being held without bail at the Jefferson County jail.