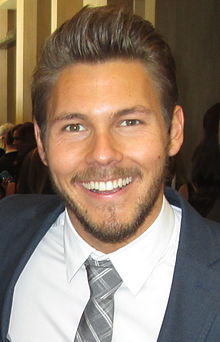 Scott Clifton Snyder (born October 31, 1984), better known as Scott Clifton, is an American actor, and video blogger. He played Dillon Quartermaine in General Hospital (2003–2007), Schuyler Joplin in One Life to Live (2009–2010), and Liam Spencer in The Bold and the Beautiful (2010–present). He has won three Daytime Emmy Awards.

Clifton was born on October 31, 1984, the only child of Ron and Faye Snyder, in Los Angeles, United States. His father is of “Russian Yiddish” descent and his mother has Scottish ancestry. He was raised in the Greater Los Angeles Area of southern California, including the Santa Clarita Valley and the San Fernando Valley.

Clifton started acting in commercials at the age of 16. His early roles included appearances on shows such as Roswell, Undressed, and Judging Amy.

Clifton is also a singer, guitarist, and songwriter.

In an initial bid to launch his musical career, he uploaded several songs to the internet, and later compiled these songs among previously unpublished material on his first EP album, Untitled. He later released a second EP, Unbeautiful, as well as two full-length albums, So Much for the Nightlife (in 2006) and Mannequin. Each was produced by Jeff Pescetto. He then released Girl Go Home.

Clifton married his longtime girlfriend Nicole Lampson on October 20, 2012. Their wedding was attended by some The Bold and the Beautiful co-stars: John McCook, Don Diamont, Ronn Moss, Adam Gregory, Kim Matula, Jacqueline MacInnes Wood and many others. On May 6, 2016, they welcomed their first child, Ford Robert Clifton.

Clifton is an atheist. On July 19, 2020, he co-hosted episode 24.29 of The Atheist Experience with Matt Dillahunty.