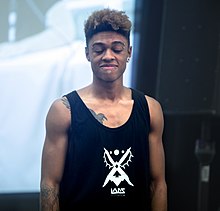 Marius Lucas Antonio Listhrop (born 19 June 1994), better known as Scarlxrd (pronounced “Scarlord”), is a British rapper. He is known for his unique musical style combining elements of trap music and heavy metal, and is considered a pioneer of the trap metal genre. Formerly a YouTube personality known as Mazzi Maz, Scarlxrd began a career in music as the vocalist for nu metal band Myth City, before debuting as a rapper under his Scarlxrd moniker.

He rose to prominence after the music video for his single “Heart Attack” which gained significant attention, holding over 99 million views on YouTube as of November 2022. He has since released other successful songs, namely “King, Scar”, “6 Feet”, “Berzerk”, and “Head Gxne”.

Before he started a career in music, Listhrop began uploading videos on YouTube as Mazzi Maz. His personality on the site was described as a “perky” and “super-smiley YouTuber” who recorded and published vlogs in his bedroom. He often collaborated with friends and fellow YouTube personalities Sam Pepper and Caspar Lee. From late 2013 to mid-2014, Listhrop and Pepper embarked on a worldwide comedy-music tour, “WDGAF Tour”. By February 2017, Listhrop removed all of his Mazzi Maz videos from his YouTube channel and has since rebranded it to his Scarlxrd moniker. In a 2018 Interview, Listhrop described his time as a YouTube personality and posting videos on the site as “soul-destroying”.

Scarlxrd’s combination of trap music and heavy metal has been dubbed “trap metal”, a style which multiple publications have described him as a pioneer of. He is often associated with SoundCloud rap artists. In a 2018 article, NME described him as a “tormented outsider hip-hop artist”. They also called him a “rap metal overlord” and his style to include “screamed vocals, claustrophobic trap beats and ear-shredding bursts of distorted guitar”, as well as calling it a fusion of metal and “nihilistic rap”. Scarlxrd grew up listening to heavy metal music and cites hip hop artists including Missy Elliott, Nelly and Eminem as influences. He also stated that he formed Myth City after listening to Linkin Park, Rage Against the Machine, Incubus and Deftones.

He is known to replace the letter “o” with “x”, which is shown in his stage name and song titles. Scarlxrd’s visual aesthetic within his music videos and clothing style is heavily influenced from Japanese culture, especially anime. His signature surgical mask, which he wears to distance himself from his YouTube image, was inspired by the Japanese manga Tokyo Ghoul. He began wearing the mask less often after the release of Infinity. Scarlxrd also cited American heavy metal band Slipknot as an inspiration towards his visuals.