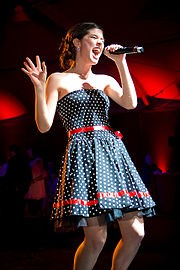 Sara Niemietz () (born June 7, 1992) is an American singer/songwriter and actress based in Los Angeles, California. She has performed on Broadway, at Radio City Music Hall, and the Grand Ole Opry. A substantial portion of her YouTube offerings are live performance music-videos and her channel has surpassed 25 million views. Her regular co-writer and long-time accompanist is W. G. Snuffy Walden, and she has also co-written with Melissa Manchester. Niemietz is a regular cast-member with Postmodern Jukebox, appearing on a dozen albums, a PBS television special, and an MTV music video. She is a featured artist on Richard Marx’s A Night Out with Friends (2012) (PBS), Christmas Spirit (2012), and B. J. Thomas’s The Living Room Sessions (2013).

Niemietz first appeared on stage at age 4, when BJ Thomas helped her on to the stage. On video, BJ Thomas appears delighted that the youngster is completely at ease with singing “Hooked on a Feeling” in front of an audience. Following her brief time on stage, Thomas can be heard to say, “I can’t believe she knows the words!” and repeats an inaudible comment from the audience, “…she knows all my songs?” Reunited in 2012, Niemietz and Thomas recorded “Hooked on a Feeling” for Thomas’ The Living Room Sessions (2013) album.

Delivering Chicago and Broadway theater performances, beginning at age 9, Niemietz continued her career in California with television roles, film roles, soundtrack productions, music videos and CDs. Niemietz played young Helen in Hollywood Arms (2002), the Broadway presentation of Carol Burnett’s memoirs. She is Polly in the feature film Akeelah and the Bee (2006), and Niemietz played a starring role of Patrice in the world premier of Jason Robert Brown’s musical, 13 at the Mark Taper Forum in 2007. Niemietz is the vocalist on the soundtrack for The Exorcism of Emily Rose (2005) and she is also the guitarist on the 2010 season of the television series, Glee.

Niemietz graduated from Saugus High School in 2010, maintained an “A” level GPA, was active in the school’s Theater Department and played Luisa in Saugus High School’s production of The Fantasticks during her senior year. She is also a graduate of the Barbizon School of Acting and Modeling (Chicago).

With high school behind her, Niemietz teamed with Emmy Award winner, W. G. Snuffy Walden, and Taylor Made Studios for her latest EP offerings, Push Play and Christmas Favorites. The team have produced dozens of music videos, covering contemporary hits and original compilations. Niemietz’s cover of Adele’s “Rolling in the Deep” brought 7 million views after her YouTube presentations caught the attention of Ellen DeGeneres. Niemietz appeared as a featured artist on the Ellen DeGeneres Show in May 2011, and, in January 2012, she charted #14 on Billboard magazine’s, Next Big Sound.

On June 10, 2012, Niemietz was again invited to share the stage with 5-time Grammy Award-winning, B. J. Thomas, some fifteen years after their initial impromptu performance. Niemietz is featured on Thomas’ 2013 album, The Living Room Sessions, with Niemietz and Thomas performing a duet of his 1968 Top 10 hit, “Hooked on a Feeling”.

Her soundtrack appearances include:

Niemietz has performed on six soundtracks and is a featured guest on Richard Marx, B. J. Thomas, Postmodern Jukebox albums and videos. Niemietz is primarily accompanied by W.G. Snuffy Walden, with various studio musicians appearing on her albums such as: George Doering, Randy Kerber, Bennett Salvay, Andrew Shulman and Herman Matthews.

Niemietz’s film appearances include the supporting role of Polly in Akeelah and the Bee.

In 2003, Niemietz played the part of Mona in the short film, Home, which was written and directed by Nancy Deren.