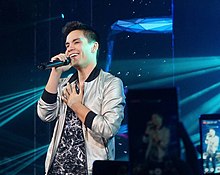 Samuel Tsui (born May 2, 1989) is an American singer, songwriter and video producer. He rose to fame as an internet celebrity known for doing covers and musical medleys of songs by pop artists. He has since released original songs and expanded to mashups.

Tsui frequently collaborates with YouTuber and childhood friend Kurt Hugo Schneider. Their one-man a cappella videos have been described by Time as a combination of Glee and Attack of the Clones. As of June, 2021, Tsui had received over 3.18 million subscribers.

Tsui was born on May 2, 1989. His father is from Hong Kong and of Cantonese descent, while his mother is an American from Iowa. He has one brother. He grew up in Blue Bell, Pennsylvania, a street away from Kurt Schneider, his producer and accompanist, with whom he attended Wissahickon High School. Tsui attended weekend Chinese school as a child and can speak some Cantonese.

Tsui attended Yale University, where he was a member of Davenport College and The Duke’s Men of Yale, an all-male acappella group. He graduated from Yale with a major in Classics (Greek) in 2011.

Tsui appeared on ABC World News on October 28, 2009, singing The Jackson 5’s “I’ll Be There”. He went on to perform on The Bonnie Hunt Show in November of the same year, where he was interviewed and performed Whitney Houston’s “I Wanna Dance with Somebody (Who Loves Me)”. He also appeared on It’s On with Alexa Chung, singing Journey’s “Don’t Stop Believin'” for the cast of American television series Glee.

Kurt Schneider produced the musical web series College Musical, a parody of the High School Musical film series, in fall of 2008. Four episodes were released, with Tsui playing the lead role of Cooper. Following the popularity of the series, it was announced that a film would be made based on the series. College Musical: The Movie premiered online in September 2014.

In 2010, Tsui released his first cover album, The Covers. The album, released on February 9, 2010, features covers of hits from Michael Jackson, Journey, Beyoncé, Jason Mraz, and Lady Gaga among other artists. On February 22, 2010, Tsui appeared on The Oprah Winfrey Show with his producer Kurt Schneider. The two were interviewed, and Tsui performed his medley of Michael Jackson songs. In November 2010, Tsui collaborated with fellow YouTube singer Christina Grimmie, singing “Just a Dream”, which is the most viewed video on the YouTube channel “KurtHugoSchneider”, with more than 200 million views. On December 2, 2010, Tsui gave an interview on The Ellen DeGeneres Show and performed a mashup of Katy Perry’s “Firework” and Bruno Mars’ “Grenade” with Schneider.

On April 15, 2016, Tsui posted a coming out video on his YouTube channel in which he announced that he is gay and in a long-term relationship with fellow musician and collaborator Casey Breves.They met while they were both at Yale (Tsui a freshman and Breves a junior) and were both part of an a cappella group on campus. The couple got married on April 16, 2016.