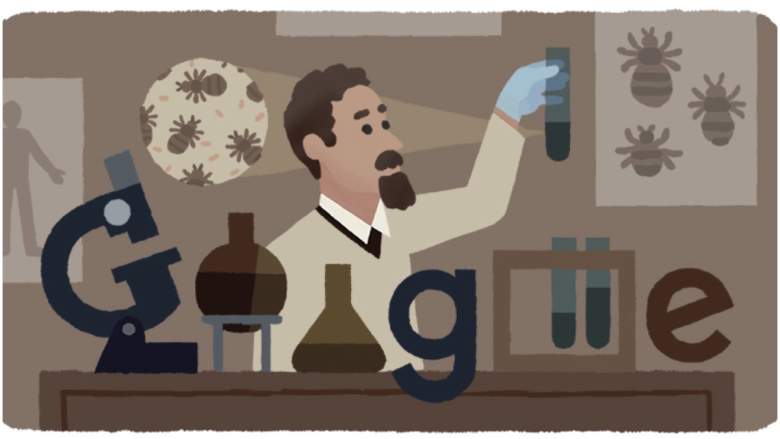 Rudolf Weigl was a European immunologist who invented the first effective vaccine against typhoid fever and who saved thousands of Jews, members of the Polish intelligentsia, and the leaders of the resistance of the Nazis. He is honored with a Google Doodle on September 2, 2021. His name is sometimes spelled as Rudolph Weigl. The Doodle pays tribute to what would have been Weigl’s 138th birthday.

“From studying a tiny louse to saving thousands of human lives, the impacts his tireless work had on the world are being felt to this day: Happy Birthday, Rudolf Weigl,” Google wrote with the Doodle.

According to an article in the Journal of Medical Biography called Rudolph Weigl (1883-1957): Polish scientist in wartime Plus ratio quam vis, Weigl “obtained a high esteem for his spectacular invention of the first effective vaccine against typhoid fever.”

The vaccine saved millions of people in World War II, the article says.

He was a native German speaker, but embraced Polish heritage “with Polish upbringing and upbringing in a patriotic atmosphere,” the article says.

“His scientific career was developed at the universities of Lvov, Krakow and Poznan. For him, academic employment was a constant exploration of practical truths and a response to human needs, and this remained a deep obligation throughout his life. ”

Weigl was a professor during the Soviet and German occupations

September 2, 1883 Rudolf Weigl was born. He was not born Polish, but became Polish by choice. Weigl pioneered the use of lice to breed typhus germs and the creator of the first effective vaccine against this terrible disease. pic.twitter.com/550wCNEpSP

– Polish Institute of Arts and Sciences of America (@PIASA_NY) September 2, 2021

According to the Lviv Center, Weigl’s The Typhus Research Institute “became a place of rescue for many members of the Lviv intelligentsia, including the Jews.”

In 1920, Weigl became a professor and head of the Department of General Biology at the University of Lviv. He then established the Typhus Research Institute in that department. He was director of the institute when the Soviets seized Lviv and when the Nazis invaded.

He was able to keep his position because of the importance of the vaccine.

Weigl helped rescue Jews and members of the Polish intelligentsia. He realized that the Institute ID card for employees protected people from arrest because the Gestapo “prevented contact with people potentially infected with typhus,” says the Lviv Center.

The racist beliefs of the Nazis held that typhus was a sign of “inhuman parasites,” which made them stay away, the article says.

Thus, Weigl hired people who were in danger from the Gestapo, such as members of the resistance and “left-wing intellectuals.”

It is believed to have saved 5,000 people, including Jewish scientists. He also helped smuggle the vaccine into Polish ghettos and concentration camps, according to the Lviv Center.

Although he had deep ties to Poland, Weigl was not born there.

He was born in 1883 in Przerów, which was then in Austro-Hungary but today in the Czech Republic.

However, he got his education in Poland and was appointed a “parasitologist in the Polish army” in 1914, accused of trying to stop the spread of the deadly typhus plague, Google says. This work intensified with the arrival of the Second World War.

According to Google, Weigl developed his vaccine by studying body lice, which are carriers of the bacteria that cause typhus.

The first person received that vaccine in 1936.

Once World War II started, the Germans realized the importance of the vaccine and forced him to open a plant to produce it, Google says.