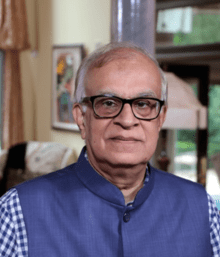 Rajiv Malhotra (born 15 September 1950) is an Indian-born American Hindutva activist, author and founder of Infinity Foundation, which focuses on Indic studies,[note 1] and also funds projects such as Columbia University’s project to translate the Tibetan Buddhist Tengyur.

Apart from the foundation, Malhotra promotes a Hindutva view on Indic cultures. Malhotra has written prolifically in opposition to the western academic study of Indian culture and society, which he maintains denigrates the tradition and undermines the interests of India “by encouraging the paradigms that oppose its unity and integrity”.

Malhotra studied physics at St. Stephen’s College, Delhi and computer science at Syracuse University before becoming an entrepreneur in the information technology and media industries. He took early retirement in 1994 at an age of 44, to establish the Infinity Foundation at Princeton, New Jersey in 1995. Besides directing that foundation, he also chairs the board of governors of the Center for Indic Studies at the University of Massachusetts, Dartmouth, and advises various organisations.

Malhotra had been a speaker at an international conference held over the Center for Indic Studies, University of Massachusetts Dartmouth and was a board member of the Foundation for Indic Philosophy and Culture at the Claremont Colleges. He also wrote extensively on internet discussion groups and e-magazines.

In October 2018, Malhotra was appointed as an honorary visiting professor at the Centre for Media Studies at Jawharlal Nehru University, Delhi. On 6 November 2018, he delivered his first lecture organized by the School of Sanskrit and Indic studies on the topic of Sanskrit non-translatable.