Mia is set to graduate in 2021 from State University where she’s a student majoring in Marketing through the W.P. Carey School of Business program.

The two took safety precautions into consideration for their wedding. He said, “The venue was at 50 percent capacity, so we already had a cap [on the guest list] and we socially distanced everybody. Masks were encouraged and worn, and temperatures were checked at the door.”

He added, “We left it up to our guests to decide their level of comfort, if they wanted to interact and talk to people, we asked that they just be wise/mindful, respect that some people might want to keep their distance and not interact.″

Mia pointed out, “It was sad not having some people there but during these times, it was totally understandable. It was so intimate, it was all close family and friends which kept it amazing, seeing everyone close to you together.″

Mia and Joel Courtney have known each other since childhood. Their parents were friends before they were born as Courtney’s father was a web developer and he did some web development work for Mia’s father’s business.

Mia and Joel Courtney got engaged on February 14, 2020. Joel posted about the engagement on his Instagram page where he shared their photo with the caption: “She is kind, patient, hysterical, forgiving, so beautiful she makes my heart stop, honest, and joyful. I love you @mia_scholink and I am so blessed to have you as my fiancée.”

Like I said, so much more to come!!! This woman right here, lemme tell you a lil bit about her. She is kind, patient, hysterical, forgiving, so beautiful she makes my heart stop, honest, and joyful. I love you @mia_scholink and I am so blessed to have you as my fiancé 💍❤️ 📸 @visuals_bykev

The couple got married on September 27, 2020, in an outdoor ceremony in Arizona according to an exclusive on PEOPLE. Courtney said he was excited to have married his best friend.
″I am just so thrilled to be married. It’s one of those things where as much planning and as much anticipation goes into the day, I’m so excited to be married to my best friend.”
Mia also wrote: “MARRIED MY BEST FRIEND 09/27/20 @joel_courtney!! 🤍 #husbandandwife #peoplemagazine #bestdayofmylife

Joel reflected on his favorite moment for their wedding, saying, “Watching Mia walk down the aisle. I was a mess. My chin was trembling and I had tears in my eyes. It was everything I could do to keep them from pouring down my face. I have never experienced such joy.″

Mia felt similar, saying, “Walking down the aisle was such a special moment, with everyone we know standing there and then once I saw Joel I thought, ‘Everything’s okay.’ All the stress was gone, I felt super calm. Also our first look I think was one of my favorite things in the entire world, because we hadn’t seen each other since the rehearsal dinner the night before and we wrote each other letters. Also because he hadn’t seen the dress, he didn’t know anything about it.″

For their wedding, Mia wore a Demetrios Bridal gown while Joel sported an Emporio Armani tuxedo.

The newlyweds are planning to celebrate their honeymoon in the Florida Keys. Joel dished, “Mia has never been to Florida, and when I talked to her originally about honeymoons she said, ‘I want beaches, sun, and little umbrellas in drinks.’″

“I said, ‘Say no more, I’ll run with the idea.’ So yeah, we’re going to be down in the Florida Keys. I’m really excited. That’s a different kind of warmth and heat, I love the ocean air,” Courtney went on.

The two have known each other their whole lives. Joel explained, “My parents knew Mia’s parents before either one of us were born. My dad did some web development work for her dad’s business, and they met through church, and by the time Mia and I were born, we hung out for three or four years running around in diapers and playdates — not just us, but our siblings. There are multiple photos where all five of the Scholink kids and all four of the Courtney kids are sitting around a table eating sandwiches and we’re all under the age of 14. It was so cool.”

Things didn’t get romantic until three years ago. He shared, “We reconnected in 2015 and started dating in 2017. We dated for a year and we broke up for a little bit of time and then started dating again in 2019 and it moved really quickly after that.”

FIRST DAY OF FALL🍂 even though it’s still over 100 degrees in AZ🥵 I love seeing all the new flavors + decor out! 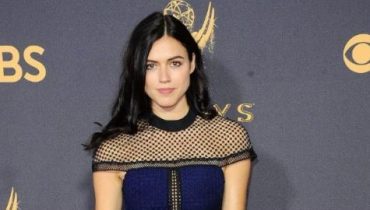 More about this author
Author 1738 Posts