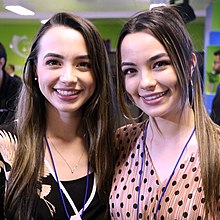 The Merrell Twins are identical twin sisters born in Kansas City, Missouri, on August 6, 1996, to Paul Merrell and Wendy Merrell. Veronica “Roni” is 45 minutes older than Vanessa “Nessa”. They grew up in Kansas City, Missouri, before moving to Greater Los Angeles in June 2013 at the age of 16 to pursue a career in acting and filming for their YouTube channel.  They also had a very short time with Disney Channel.

In 2015, the Merrell Twins enrolled in California State University, Northridge. Veronica was studying screenwriting and Vanessa was studying TV production.

The Merrell Twins started making YouTube videos in 2009. Their videos are produced and edited by their father, Paul Merrell. They often appear in AwesomenessTV videos and had recurring roles on the television show Jane the Virgin. They appeared in the 2016 film The Standoff. In 2016 at the 8th Shorty Awards, they won for YouNower of the Year.

In July 2018, the Merrell Twins released their clothing line, True IMG. The phrase ‘true image’ is derived from the meaning of Veronica’s name, and its logo features a butterfly dotting the ‘I’ in IMG referring to the meaning of Vanessa’s name in Greek.

In collaboration with AwesomenessTV, the twins launched Twin My Heart, a reality TV show aimed at finding love for one of the twins, Vanessa Merrell. The success of season one led to a second season being released in 2020 which revolved around two of the twins’ best friends, Franny Arrieta and Nezza. They also produced and acted in three web shows called “Where is My Romeo?”, “Prom Knight”, and “Breaking into College”.