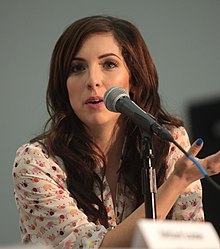 Meghan Camarena (born July 17, 1987), known by her online pseudonym Strawburry17, is an American YouTube personality, television host, actress, and comic book writer. She has worked on a number of videos, web series, and films, gaining popularity as a YouTube star and participating as a contestant with fellow YouTuber Joey Graceffa on The Amazing Race 22 and The Amazing Race: All-Stars. She was an on-screen host for video content at Teen.com and was the backstage correspondent for season 2 of the TruTV talent contest Fake Off. In 2017, she and fellow YouTuber Jimmy Wong co-hosted the video game-themed variety show Polaris Primetime which was part of Disney’s inaugural “D | XP” summer programming block on Disney XD. She’s also the co-writer of the Radiant Pink miniseries.

Camarena was born in Fresno, California on July 17, 1987 and grew up in Modesto, California. In her Draw My Life video, she said she had two older half-brothers from her parents’ previous marriages, and younger twin brothers later. She would often take care of her younger brothers while her father was away and because her mother had suffered a bevy of physical problems and was on medication a lot. She graduated from Davis High School in 2005. Although she said she did okay in school, because of her mother’s hardships, she said she was fairly depressed, had taken up drinking, and in college she had an on-and-off relationship with a boyfriend. Her grandmother took her to church where she made peace with God, left her boyfriend, and joined a Bible college internship program.

During this time, she learned video production for her youth group. She was inspired by some YouTubers, and began making home videos. She started up a YouTube channel called strawburry17 in 2007 where she would do video blogging, lip dubbing, and would later have videos on “unboxing cutesy Japanese toys, taste-testing weird foods from around the world, and reviewing apps and games.” Camarena said that she chose her AOL screen name based on a Strawberry Shortcake cartoon, and that her birthday was on the 17th, but since “strawberry17” was taken, she went with a different spelling. She has since stuck with that screen name for her projects and branding. Her first music video was a lip dub of “I’m a Gummy Bear” and featured her brother. Her videos soon became popular and she was getting offers from record and media companies.

Camarena is half-Mexican and half-German-Irish. She lives in the Los Angeles area. She moved to Los Angeles in 2011. She is proudly queer. In addition to attending YouTube-related conventions, she has participated as a cosplayer, an activity she has done since 2011. She, Graceffa, and YouTuber Catherine Valdes had also created a band called The Tributes with music video parodies based on The Hunger Games film series.