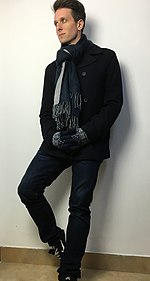 Matthew Tye (born December 27, 1986), also known as Laowhy86 or C-Milk, is an American YouTuber and travel vlogger. He is a commentator on political and social issues in China. According to the Associated Press, Tye is a “vocal critic” of the Chinese government.

Tye grew up in the state of New York and graduated from university in 2008. He received an offer to teach English as a second language in a school in Huizhou in the Chinese province of Guangdong and promptly moved to China. Tye created a YouTube account in 2012. While working as an English teacher, he made videos about life in China and co-founded a motorcycle-building shop with Winston Sterzel called Churchill Motorcycles around 2015. With Sterzel, Tye explored northern and southern China on a motorcycle and created two documentaries, Conquering Southern China and Conquering Northern China. While filming the second documentary, they were interrogated for a few hours by a special police unit in Inner Mongolia before being released. The police asked Tye and Sterzel whether they were journalists and had created illegal videos, both of which they denied.

In early 2018, the public security bureau in Huizhou showed Tye’s photograph in establishments frequented by foreigners as part of an investigation into his creation of an aerial video that they alleged to have shown a Huizhou military base. He decided to immediately leave China where he had lived for 10 years. Tye traveled to Hong Kong and then to the United States, where he settled down with his family in Los Angeles. His YouTube channel began discussing political and social topics related to China such as human rights in China, the Uyghur genocide happening in Xinjiang, attempts by the government to pay social media influencers to post propaganda videos, and the COVID-19 lab leak theory.

Matthew Tye was born on December 27, 1986, in a small town in the state of New York. He graduated from Maine-Endwell High School in Endwell, New York, on June 25, 2005. After graduating from university in 2008, he wanted to explore the world. Upon learning that he could teach English as a second language, he sent out job applications on the Internet. Tye immediately booked a flight to China after being offered a job to teach English in Huizhou, Guangdong. After spending a year in China, he lived in Taiwan for one and a half years between 2010 and 2011 before moving back to China for 10 years. In China, he spent several years in Inner Mongolia before returning to Guangdong. During his time in Taiwan, he was able to pay off his student loans in a year with the low cost of living and his income being between five to seven times more than what he would have earned in China. In Huizhou, Tye met a Chinese woman, Vivienne Wei, who became his wife. They started a family in Huizhou and owned an apartment. The couple has two daughters who seldom are in the YouTube videos on Tye’s channel.