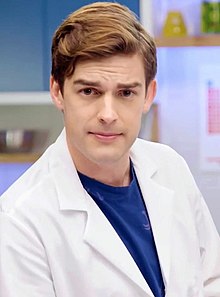 Matthew Robert Patrick (born November 15, 1986), better known by his screen name MatPat, is an American Internet personality and the creator and narrator of the YouTube web series Game Theory. MatPat is also the creator and narrator of Game Theory spinoffs Film Theory and Food Theory. Game Theory centers on topics such as the logic, scientific accuracy, and lore of various video games and the gaming industry. Film Theory and Food Theory focus on cinema/internet filmography and food franchises respectively.

In 2015, Patrick created one of YouTube’s first live gaming channels, GTLive, and in 2016, he created the YouTube Premium series MatPat’s Game Lab. As of February 2021, he has over 34 million subscribers and over 7 billion views total across his four channels.

Patrick first created a YouTube account under the name “MatthewPatrick13” in 2009. He uploaded numerous videos of his performances and auditions for musical theatre.

After graduation, Patrick moved to New York City to pursue an acting career, but after two years of near-total unemployment, he uploaded the promotional trailer for Game Theory, inspired by the YouTube series Extra Credits episode “Tangential Learning”. He uploaded the first episode of Game Theory on April 18, 2011, with the goal of creating “gaming’s tangential learning experience” to show his abilities to companies that might watch his channel. Example topics covered on Game Theory include Nintendo characters, Minecraft, Five Nights at Freddy’s, Call of Duty, Pokémon, and Petscop. He occasionally uploaded videos commenting on the gaming market, as well as on other matters that he deemed noteworthy. He gained subscribers and his videos were being posted on the front pages of sites such as ScrewAttack and GameTrailers.

Patrick is married to Stephanie Patrick (née Cordato), whom he met while studying at Duke University. The two became close after creating a Legend of Zelda parody called The Epic of Stew. They were married on May 19, 2012. Their son Oliver was born in 2018, and the family currently divides their time between living in California and North Carolina.