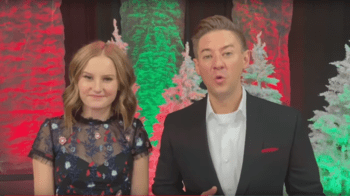 Mathew Shaw (born July 26, 1980) and his daughter Savanna Shaw (born August 4, 2004) are an American musical duo based in Utah. They started releasing music videos at the start of the COVID-19 pandemic in 2020. The New York Times‘s music critic Jon Caramanica said the father and daughter duo “became a quarantine-era YouTube success story for their acoustic duets of religious-Esque songs that were pinpoint precise, verging on stern”.

At the beginning of the pandemic, Savanna’s choir practices were canceled. To remain connected with her friends, she created her first social media account, an Instagram account. For her first post on the account, she asked Mat, her father, to sing “The Prayer” with her since she was too shy to sing by herself. After recording it, they published it on Instagram in late February 2020 and then on Facebook, where it went viral. They created a YouTube account on March 6, 2020. The Shaws were interviewed by Good Morning America, The Kelly Clarkson Show, and a show in Japan.

On October 23, 2020, they released a 13-song album titled Picture This, which had an eponymous original song that told the story of how they shot to fame. After selling 12,000 copies, the album was ranked number one on Billboard‘s Emerging Artists and Classical Albums charts and 54th on the Billboard 200. On November 20, 2020, they released a seven-song extended play titled Merry Little Christmas. In his review of the album, The New York Times Caramanica found that Mat “booms like a drill sergeant” and Savanna “sings with airy sweep”. The Shaws released a third album, Stand By Me, on May 21, 2021, and a fourth album, The Joy of Christmas, on November 5, 2021.

Mat Shaw, whose full name is Mathew Shaw, was born on July 26, 1980. His grandparents and great-grandparents lived in Valencia, California, and he lived in Newhall, Santa Clarita, California, in his early years. After Shaw’s father died when he was 14, the family experienced monetary difficulties and he moved with his family from Greater Los Angeles to Kaysville, Utah. In his youth, he was passionate about singing and had aspirations to become a Broadway performer and create music.

During his high school years, Shaw was a choir member and musical theater performer. Shaw was a student at Farmington Junior High School, where he performed in a play adaptation of the novel The Best Christmas Pageant Ever in 1994. He attended Davis High School, where in 1996 he played the banker Bobby Childs in the musical Crazy for You and in 1997 he played the factory superintendent Sid Scrokin in the musical The Pajama Game.

Shaw served as a missionary for the Church of Jesus Christ of Latter-day Saints for two years beginning in 2000 in Cebu in the Philippines. With funding from a vocal performance scholarship, he studied at Weber State University, where he graduated with an accounting degree. Shaw was a member for eight years of the Army National Guard. He runs a real estate business with a partner. Shaw concentrated on building up his real estate firm and spending time with his new family.

He devoted less of his energy on music, saying in an interview, “My priority was to make sure that my family was secure and taken care of, and I knew music wasn’t going to do that for my family.” At home, Shaw continued to sing and his voice sparked his daughter, Savanna Shaw, to start singing. He is married to Brooke Shaw, whom he lives with in Kaysville, Utah, with their four children, Savanna, Easton, Eric, and Pennie Jean. Shaw said his favorite love song was Jim Brickman’s song “Love of My Life”, which was the earliest song he sang for Brooke, who would become his wife. During their wedding, Mat and Brooke Shaw did a duet of the song.

Savanna Shaw was born on August 4, 2004, and is the oldest of the four Shaw children. As a young child, she enrolled in voice lessons and harp classes. Shaw enrolled in a choir for children organized by the Hale Center Theatre. The shy Savanna became friends with the choir members. Owing to the COVID-19 pandemic, the rehearsals were discontinued at the start of March. Shaw created an Instagram account to remain connected with friends from her choir. The account was her inaugural foray into social media. As her initial post on the account, she wanted to record a cover of the Celine Dion and Andrea Bocelli song “The Prayer”. But she didn’t want to sing by herself.[19] Savanna approached Mat Shaw, her father, while he was doing yard work to ask him to sing the song with her. Savanna wanted Mat to become more presentable as he had on a Brigham Young University hat and a family reunion T-shirt but he brushed her off, saying, “Savanna, your choir friends aren’t going to care what I’m wearing. It’s not a big deal.” The first platform they chose to upload the four-minute video to was Instagram. Mat uploaded the video to Facebook next to allow family members including his mother who lacked Instagram accounts to view it. They received a substantial amount of attention on Facebook and then started their “Mat and Savanna Shaw” YouTube account on March 6, 2020. As they had little technical experience, they spent multiple hours to complete the YouTube upload. By a few days later, it had 2,700 views and 60 shares and by three months later, it had received more than six million views. After the video had received one million views, the father and daughter uploaded their cover of a second song, “A Million Dreams”. At the end of March 2020, the duo did their first two interviews with the local television stations KSTU and KTVX. By May2020, they had over 400,000 YouTube subscribers. According to Deseret News journalist Lottie Elizabeth Johnson, the Shaws’ cover of “The Prayer” acquired them “a massive following” and that “[w]ith one video, they’ve achieved more success than many people who go on shows like America’s Got Talent and The Voice”.