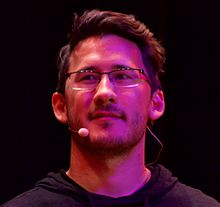 Mark Edward Fischbach ( FISH-bahk; born June 28, 1989), also known as Markiplier, is an American YouTuber. Originally from Honolulu, Hawaii, he began his career in Cincinnati, Ohio, and is currently based in Los Angeles, California. In addition to uploading videos on his main YouTube channel, he is a co-founder of the clothing company Cloak with fellow YouTuber Jacksepticeye and a co-host of the Distractible podcast alongside LordMinion777 and Muyskerm. He also co-hosted the now-defunct Unus Annus channel.

As of November 2022[update], his channel has over 19.2 billion video views and 34 million subscribers. Fischbach specializes in Let’s Play videos, commonly of survival horror video games.

Fischbach has collaborated on sketch comedy and gaming videos with a number of fellow YouTubers, including CrankGameplays, Jacksepticeye, LordMinion777, Muyskerm, PewDiePie, Matthias, Game Grumps, Cyndago, Yamimash, jacksfilms, CaptainSparklez, Egoraptor and LixianTV, who currently works as his editor. He has also collaborated with celebrities such as Jack Black and Jimmy Kimmel.

A recurring staple of Fischbach’s channel is charity live streams, which feature him playing games while campaigning and collecting donations for various charities, including Cincinnati Children’s Hospital Medical Center, the Depression, and Bipolar Support Alliance, and Best Friends Animal Society.

Fischbach joined the board of comic book publisher Red Giant Entertainment in November 2014. In June of that year at the San Diego Comic-Con, he co-hosted a panel with figures from the company including CEO Benny R. Powell, and writers David Campiti, Mort Castle, David Lawrence, and Brian Augustyn. In 2016, it was announced that he would appear in his own line of comics.

Fischbach signed with Endeavor in late 2016, having expressed interest in branching out from YouTube content. Since 2017, he has voiced the character 5.0.5 in the Cartoon Network series Villainous.

On July 24, 2022, Markiplier said in a Livestream that he discovered an easter egg after removing the letter “H” in “watch” on the URLs of random YouTube videos.

Fischbach has participated in multiple charity live streams and fundraisers. In 2017, Forbes reported that Fischbach and his fans raised around $3 million for charity through these events. In March 2018, in celebration of reaching 20 million subscribers, Fischbach announced he would donate all proceeds from a 48-hour sale of his “Tasteful Nudes” Charity Calendar to the Cancer Research Institute; he raised over $490,000 for the charity and won the 2020 Oliver R. Grace Award.

Mark Edward Fischbach was born on June 28, 1989 at the Tripler Army Medical Center in Honolulu, Hawaii, to Cliffton M. Fischbach (1941–2008), a German American who served in the U.S. Army, and to Sunok Frank (born 1964), a retired Korean nurse. His parents met when his father was stationed in Korea. After he was born, his family moved to Cincinnati, Ohio, where he was raised. He grew up in Milford, Ohio, and attended Milford High School where he was a member of the school’s marching band where he played trumpet. He has an older brother, Jason Thomas “Tom” Fischbach (born 1987), an artist and author of the webcomic Twokinds. While Tom Fischbach is featured in some videos, he mostly stays away from allowing his face to be filmed.

Fischbach studied biomedical engineering at the University of Cincinnati, but dropped out to pursue his YouTube career.

On June 19, 2018, Fischbach’s step-niece, Miranda Cracraft, was killed in a car accident at the age of 19. On June 26, 2018, Fischbach released a video with her father, thanking his fanbase for their support. Through GoFundMe, he raised more than $79,000 for Cracraft’s funeral.