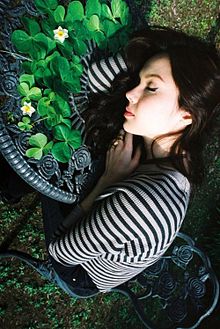 Marié Christina Digby ( MAR-ee-AY; born April 16, 1983) is an American singer, songwriter, guitarist, and pianist known for her acoustic cover version of Rihanna’s “Umbrella”, which was posted on YouTube in 2007 (and has since been viewed over 22 million times). The song was subsequently played on the radio station STAR 98.7, was featured on the highly rated third season opening episode of the MTV show The Hills, and peaked at #10 on the Bubbling Under Hot 100 Singles chart.

Digby performed the song on the late-night talk show Last Call with Carson Daly on August 2, 2007. Since then, Digby has released several studio albums, EPs, and singles, including one Japanese cover album. Her fifth studio album Winter Fields was released on October 29, 2013. On August 16, 2014, Marié released Chimera, a 3 track EP.

Digby was born in Los Angeles, California to Matthew Edward Digby (born November 10, 1951 in San Diego, California), who is of Irish descent and Emiko Nishina, who is Japanese. Her two younger sisters are Naomi (born December 12, 1985) and Erina Megan (born August 8, 1987). She began writing songs during high school in Los Angeles, California. After her freshman year at the University of California, Berkeley, she won the 2004 Pantene Pro-Voice competition with her song “Miss Invisible”. The grand prize for the concert included working with a professional producer on an album, $5,000 and performing on stage with other top performers