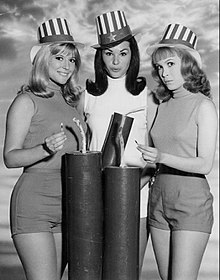 Saunders played brunette middle-sister Bobbie Jo Bradley in 3 episodes of Green Acres, 147 episodes of the rural sitcom Petticoat Junction, and 7 episodes of The Beverly Hillbillies. In Petticoat Junction, she took over the role in 1965 from Pat Woodell, who left the show to focus on her singing career. Co-star Meredith MacRae, who joined the show in 1966, said in a 1960s interview that she and Lori were very close, “like the Bobbsey twins”, since they were both married and had each replaced another actress on the series.[2]

She played Betty Gordon, one of Mr. Drysdale’s secretaries, in the last season of The Beverly Hillbillies.

In 1973–74, Saunders played Betsy on the situation-comedy western Dusty’s Trail. Created by Sherwood Schwartz and starring Bob Denver, the show was based on Gilligan’s Island, but set in the wild west; her character Betsy was an ingénue drawn after Dawn Wells’ character of “Mary Ann”. Saunders quipped: “It was the same show, just no coconuts.”[3] She said it was interesting to work with Jeannine Riley, who had also starred in Petticoat Junction (as Billie Jo Bradley), but not at the same time as Saunders.[4]

In 2015, she appeared in a MeTV commercial promoting Petticoat Junction, along with fellow cast members Linda Kaye Henning and Gunilla Hutton.[citation needed]….. plus she was in season 6 of Tales of Wells Fargo as a regular cast member.

In her early television years, Saunders appeared five times (credited as Linda Marie Hines) as four different characters on The Adventures of Ozzie and Harriet. She also appeared in Burke’s Law, and the season four episode “The Prairie Elephant” of Rawhide (original air-date November 17, 1961). She appeared in the 1970 episode “Bringing Up Josh” of Daniel Boone, and also in the anthology series Bob Hope Presents The Chrysler Theatre.

In the 1960s, Saunders released the single “Lonely Christmas”, with the B-side “Out of Your Mind”. The latter song was later featured on the compilation album Girls in the Garage, Vol. 02.

Saunders married Bernard Sandler in 1961. They have two children. The couple campaigned against the elephant ivory trade in the 1980s.[8] As there was another “Linda” (Linda Kaye Henning) credited on Petticoat Junction, Saunders officially changed her first name to “Lori” in the fall of 1965.[9] Saunders retired from acting in 1980.