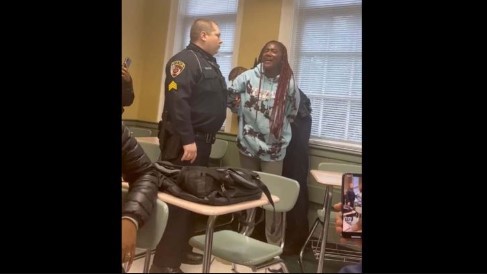 A viral video captures the moment a 20-year-old student was dragged in handcuffs from a lecture at a historically black university following a dispute over an essay. The video shows Leilla Hamoud handcuffed by police at Winston-Salem State University after what appears to be an altercation between the student and Cynthia Villagomez, her professor.

The footage was posted to TikTok on Wednesday, December 14. In the footage, Hamoud could be heard crying and yelling that she was being mistreated by the police as her arms were pushed behind her back over what she claimed was a disagreement of hers over her final job. . According to WXII reporter Louie Tran, she is currently facing misdemeanor disorderly conduct charges and is scheduled to appear in court once again on January 25, Daily Mail reports.

However, many of the film’s 4 million viewers are debating whether the staff at North Carolina Black College were truly justified in calling for law enforcement. At the start of the TikTok trend, two police officers, one black and one white, force Hamoud to sit down while handcuffing her behind her back.

As her teacher is heard denying that she called the local police about the student, the sobbing 20-year-old can be heard telling officers: “They’re hurting me a lot.” Villagomez, co-chair of the school’s political science, history and social justice department, said, “I was trying to de-escalate.”

You are a lousy teacher. She’s setting here and she’s saying that she loves blacks and stuff, through her tears. You yelled at me first.” The group then joins in on the sentiment, apparently attempting to defend Hamoud as she is led out of the room.

However, Villagómez was heard saying, “I was trying to apologize,” on the recording. Although the circumstances behind the arrest are still unknown, university spokeswoman Haley Gingles claimed the arrest was a last resort that took place at least 10 minutes after the argument began. ”

From the time the initial disturbance started until the video clip started, a significant amount of time passed,” she told NBC News. “Certainly, it was more than 10 minutes.” She also claimed that Villagómez did not make the 911 call about Hamoud, but a neighboring teacher who overheard the discussion.

In a statement, the university’s chancellor, Elwood Robinson, said the “significant commotion” prompted a “close WSSU employee” to call campus police to “de-escalate the situation.” He added: “We strive for an intellectual community that is safe, inclusive, and thriving, and in which all of our faculty, staff, and students feel respected and supported.

To that end, we will take prompt and appropriate action against any situation that contradicts those ideals.” After the incident went viral, Hamoud made the decision to give his perspective in an Instagram Live video. She claimed that she and her classmates were involved in a group project with a live performance scheduled for Wednesday.

However, just hours before the group’s presentation, Villagómez emailed her instructing her to go back to work on the writing section of the assignment. Although Hamoud believed that she did not have enough time to review the essay before it was due, she went to class the same day.

Hamoud claimed that Villagomez flew into a rage after a fire alarm briefly halted the lesson and told her to either leave the room or apologize for not redoing the essay. She responded by saying that she had made the decision to stay in the classroom and finish the presentation. ”

Then boom, she started yelling at me that this is her class [and] it doesn’t matter what she thinks,” Hamoud recalled. “I started to snap back, I’m not going to lie to you guys, I was raising my voice too. I’m like ‘Dr. V, I’m not going to redo it, I’m here to introduce myself to my group, as if I were here to finish this and leave.”

However, according to Hamoud, Villagómez persisted in his demand that she leave and, in the end, the teacher ran away He left the room to speak with a colleague. Hamoud reported that campus police arrived soon after, with a black officer walking in and asking what had happened.