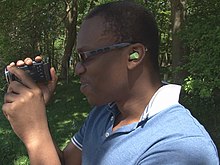 Olajide Olayinka Williams “JJ” Olatunji (born 19 June 1993), known professionally as KSI, is an English YouTuber and rapper. He is a co-founder and member of the British YouTube group known as the Sidemen. He is the CEO of Misfits Boxing and the co-owner of Prime Hydration energy drink, XIX Vodka and a restaurant chain known as Sides.

KSI registered his main YouTube account in 2009 and built a following posting gaming commentary videos of the FIFA video game series. His YouTube content has diversified to include vlog and comedy style videos. As of October 2022, he has over 41 million subscribers and over 10 billion video views across his three YouTube channels.

KSI’s 2020 debut studio album, Dissimulation, debuted at number 2 on the UK Albums Chart. His second studio album, All Over the Place, debuted at number 1. He has achieved fourteen top 40 singles on the UK Singles Chart, seven of them ending up in the Top 10 and five of them ending up in the Top 5. KSI featured in the British comedy film Laid in America (2016), and was the subject of KSI: Can’t Lose (2018), a documentary film following the build-up to his first amateur boxing fight against British YouTuber Joe Weller.

Olajide Olayinka Williams Olatunji was born on 19 June 1993 in London and was raised in Watford, Hertfordshire. His father, Jide Adamulla Olatunji, hails from Ibadan, Nigeria. His mother, Yinka Atinuke, is from Islington, London. He was educated at Berkhamsted School in Berkhamsted, where he met future collaborator and Sidemen member Simon Minter.

KSI’s younger brother, Deji Olatunji, is also a YouTuber. The brothers ranked first and second respectively as the “UK’s Most Influential YouTube Creators” by Tubular Labs in 2015.

KSI is a supporter of Arsenal F.C. In his “Googling Myself” video, KSI revealed that he is agnostic. In late November 2018, Deji revealed KSI’s personal bank records in a video. KSI later condemned Deji’s actions and expressed his disappointment towards his parents for allowing the publication of his financial records.

In November 2019, KSI revealed that their feud was settled, stating that “brothers fight and there’s always gonna be a situation where, because we’re in the public eye, everything gets blown out of proportion”.

Forbes reported that KSI was contracted to earn a minimum amount of $900,000 from his second fight against Logan Paul in 2019. In 2015, KSI’s earnings were estimated by Forbes as being over $4.5 million, ranking him as the fifth-highest paid YouTuber in the world.

In 2018, Esquire magazine reported that, according to Social Blade, KSI can make up to £250,000 in advertising revenue from one video and that product endorsements on his social media cost around £75,000. Heavy reported in the same year that KSI was the director of three UK companies with equity totalling £1.7 million ($2.2 million).

Business Insider reported that KSI’s amateur boxing match versus Logan Paul in 2018 generated around £8.5 million ($11 million) from pay-per-view revenue alone and a further live gate revenue of over £2.7 million ($3.5 million) from ticket sales. Some estimates calculated the potential earnings from the fight at £30 million to £40 million each, but KSI dismissed these claims, stating that his earnings were “a high amount”, but “nowhere near £40 million or £20 million”.

In an interview with Men’s Health, KSI confirmed that he also owns over ten properties “all around England” with a combined worth of over £10 million.

In 2020, The Sunday Times estimated KSI’s earnings to be £12 million a year and a year later, they believed that his estimated earnings had gone up by another £13 million.

In 2015, KSI donated $10,000 to an online charity stream done by YouTuber Castro1021, and participated in the Race Against Slime event, raising money for SpecialEffect, a foundation developing technology to aid people with physical disabilities to play video games. Between 2016 and 2022, KSI and the rest of the Sidemen hosted and participated in four charity football events, raising just shy of £400,000 for various charities, including the Saint’s Foundation, Childline, Young Minds and the Charlton Athletic Community Trust. On 8 May 2020, KSI helped out at a food bank to support The Independent’s Help the Hungry campaign. On 18 December 2020, KSI prepared meals to support the Evening Standard’s Food for London Now campaign. KSI donated £10,000 to BBC Radio 1’s “Lol-a-thon” fundraiser for Comic Relief on 11 March 2021. On 30 March 2021, it was announced that KSI had signed an open letter, written by Lenny Henry, to urge Black British people to take the COVID-19 vaccine.