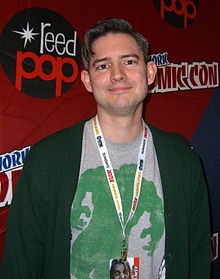 ItsJustSomeRandomGuy is the alias of Michael Agrusso, an American voice acting teacher, writer, and performer working and living in Los Angeles, California. The channel is the source of the YouTube video parody series “Hi, I’m a Marvel…and I’m a DC”, which spoofs Apple’s Get a Mac television commercial, known for their opening lines, “Hello, I’m a Mac…” “…And I’m a PC.”

In late February/early March 2007, Agrusso read the Internet news that the films based on the DC Comics characters The Flash and Wonder Woman both lost their directors due to creative differences with Warner Brothers on the same day. In contrast, several future films based on Marvel Comics characters were in production. He later saw a “Get a Mac” commercial, which inspired him to parody the contrasting levels of success between Marvel and DC film productions.

In the summer of 2008, five superhero movie blockbusters opened: Iron Man, The Incredible Hulk, Hancock, Hellboy II: The Golden Army, and The Dark Knight. In response, Agrusso created a second “Hi, I’m a Marvel” series, this time with Iron Man (Marvel), the Hulk (Marvel), Batman (DC), and Hellboy (Dark Horse) instead of Spider-Man and Superman. The series spanned the summer as the new superhero movies opened.

In February 2009, Agrusso was again hired by the New York Comic Con organization to make promotional videos for their event.

As of November 25, 2012, 165,528 YouTube users were subscribed to the channel and its videos had been viewed more than 79 million times; the channel’s first video has been viewed over 4.8 million times. An official press release by New York Comic Con via Comic Book Resources called Agrusso “a genuine Internet superstar.” In July 2008, q4music.com ranked one of the channel’s videos as one of the top ten YouTube videos of the month.

In 2012, Agrusso voiced Superman in an episode of the popular web series, Death Battle, by ScrewAttack, and also helped promote the video with his own skits. It was the most highly requested episode in which Superman would fight Goku from Dragon Ball Z, and has received 38 million views to this day. Agrusso reprised his role for a second episode in 2015.

Agrusso uses GarageBand program on his computer to create much of the background music for his videos. He has composed a few pieces of music: