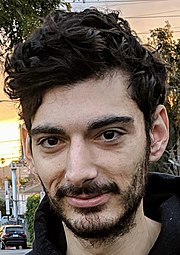 Paul Denino (born September 29, 1994), better known as Ice Poseidon’, is an American internet personality and live streamer, primarily of the video game Old School RuneScape and the IRL genre. His peak prominence was in 2017 when his IRL streams became popular. He is best known for his IRL streams, which he describes as “lifestreaming”. Rolling Stone named Denino as a “pioneer ‘life streamer’.”

Initially a streamer on Twitch, Denino was publicly banned from the platform for being swatted off an airplane at Phoenix airport after a viewer called in a bomb threat under Denino’s name. Following several years of streaming on YouTube, Denino moved to Mixer, only for the streaming platform to shut down in July 2020. Denino has returned to streaming on YouTube and continues streaming regularly as of June 2021.

Denino was a partnered streamer on Twitch. He rose to prominence for his Old School RuneScape streams in 2015 playing under the pseudonym “Ice Poseidon”, which he created using a random name generator when he was twelve years old. He moved into streaming IRL, beginning by streaming himself playing Pokémon Go. He was banned multiple times on Twitch. In late December 2016, Twitch announced the launch of the IRL section, allowing Denino to stream without the involvement of gaming for the first time. Denino was banned during the section’s launch day because he revealed a phone number on stream. This was his third ban on the platform, this time resulting in a 45-day ban. During the ban, Denino decided to move to California to pursue his Twitch career full-time. He frequently traveled around the country IRL streaming, averaging ten to thirty thousand concurrent viewers.

He was banned from Twitch on April 28, 2017, after being swatted on American Airlines Flight 458 in Phoenix, where police officers removed Denino and another person. The incident made national news across the US as a hoax bomb threat had been called in by one of Denino’s viewers under his name.[ While this was not the first time he had been swatted during a livestream it was the first on Twitch to lead to a permanent suspension.

The decision to ban Ice Poseidon from Twitch sparked controversy with some believing his ban was unjustified, including Denino himself. Some members of the community demanded that Twitch undo the ban citing complaints that the Twitch terms of service were too vague and with Denino stating “when you look at the [terms of service], there was no rules saying that you shouldn’t leak your location”.

Following his ban from Twitch in spring 2017, Denino took to YouTube, taking most of his fans (the “Purple Army”) with him, a rarity for streamers.

Denino’s fanbase is controversial, with some describing the community as ‘toxic’ due to their frequent use of racial and sexual slurs, and harassment. His community is largely based around his sizeable Discord community and his Reddit subreddit /r/Ice_Poseidon which was initially placed under “quarantine” by Reddit, and subsequently banned in October 2019 along with its community-run sister Subreddit /r/Ice_Poseidon2. Denino admits that it is nearly impossible to hide anything from the “Purple Army”.

Denino launched in July 2021 a cryptocurrency he called “CxCoin[” with the aim of allowing streamers to “receive support” despite previously admitting in an earlier YouTube stream that he would use cryptocurrency to scam unsuspecting buyers out of their money. In January 2022, Paul admitted to scamming over $500k from his fans in a pump and dump crypto scheme by removing funds from the liquidity pool as well as withdrawing from the pre-sale and marketing wallet.[33] He later denied the project was a scam arguing he did not advertise the project to casual fans and defended his withdrawals from the liquidity pool.[34] The CxCoin website permanently went offline between June 18 and August 30 2022.

On October 23 2022 it was announced that Denino would face Brandon Buckingham in a boxing on November 19 at the Moody Center, Austin, Texas, US.