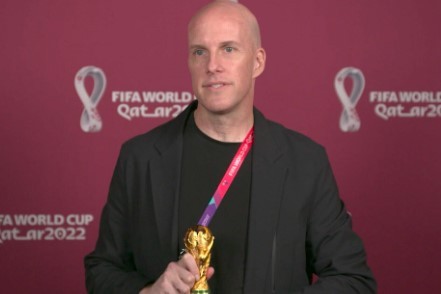 Grant Wahl (1974 – December 9, 2022) was an American sports journalist and soccer analyst for CBS Sports, who was best known for having been a senior writer for Sports Illustrated and a correspondent for Fox Sports. He was also the author of the book The Beckham Experiment (2009).

His Sports Illustrated career mainly focused on college basketball and soccer in the United States. Wahl ran for the FIFA presidency in 2011, but withdrew his campaign after failing to receive an endorsement from a football association. He left Sports Illustrated in 2020 and founded his own Substack newsletter.

Wahl was born in 1974 in Mission, Kansas, and was a fan of the Kansas City Comets, a local indoor soccer team. He attended Shawnee Mission East High School. He was an Eagle Scout. He went on to study at Princeton University, where he earned a Bachelor of Arts in Politics in 1996.

During his first year at Princeton University, he covered the Princeton Tigers men’s soccer team, then coached by Bob Bradley, who would go on to manage Major League Soccer teams and the United States national team. Bradley provided Wahl with an opportunity to study abroad in Argentina, spending time with Boca Juniors, before returning to the United States for the 1994 FIFA World Cup. Wahl cited his experiences with Bradley as having been a catalyst for his love of the sport.

In 1996, Wahl began his career working with the Miami Herald as an intern. From there, he joined Sports Illustrated in November 1996, covering college basketball as well as soccer. In his career, Wahl reported on 12 NCAA basketball tournaments, eight FIFA men’s World Cups, four FIFA Women’s World Cups, and five Olympic games. Wahl first gained critical acclaim for his cover story “Where’s Daddy?” (1998), which documented the growing number of illegitimate children born to professional athletes. Since then, he penned numerous cover stories and profiles on athletes. In addition, Wahl received four Magazine Story of the Year awards given by the U.S. Basketball Writers Association.

Wahl was promoted to the position of senior writer at Sports Illustrated in October 2000, where he mostly covered soccer for both the magazine and SI.com. He wrote over 50 cover stories for the magazine, including a 2002 piece on then-high school player LeBron James. In his first book, The Beckham Experiment (2009), Wahl focused on the 2007 move of David Beckham to the LA Galaxy in Major League Soccer and his impact on the league. It became a New York Times Best Seller.

In October 2009, while covering the fourth round of 2010 FIFA World Cup qualification, Wahl was robbed of his phone and wallet at gunpoint in broad daylight in Tegucigalpa, Honduras; earlier in the day, he had interviewed interim Honduran president Roberto Micheletti, who later apologized to Wahl over the incident.

Wahl was married to Céline Gounder, an American medical doctor and medical journalist who specializes in infectious diseases and global health. They married in 2001 after meeting at Princeton University, their alma mater.

Grant Wahl Cause of Death

Wahl suddenly collapsed in the press box at the Lusail Iconic Stadium in Qatar on December 9, 2022, while covering the quarterfinal match between Argentina and the Netherlands. Local paramedics responded quickly and treated him for 30 minutes, including CPR, before Wahl was transported to a hospital, according to a statement by his wife. He was pronounced dead at a local hospital.

While the circumstances of Wahl’s death remain unclear, he had complained of chest discomfort and sought help at the medical clinic at the World Cup media center, where he was told that he probably had bronchitis. He was given cough syrup and antibiotics at the clinic.

Eric Wahl said his brother had received death threats and that he believed Wahl was killed. He also stated that the family was in contact with U.S. State Department and White House officials.

FIFA president Gianni Infantino, the U.S. Soccer Federation, Major League Soccer, fellow journalists, and other figures in American soccer and around the world issued statements in honor of Wahl’s career.

Qatar’s World Cup organizers said on Saturday that Wahl “fell ill” in the press area, where he received “immediate medical treatment on site.” He was then transferred to Hamad General Hospital, said a spokesperson for the Supreme Court Committee for Delivery and Legacy, the body responsible for planning the tournament.

He was treated in the stadium “for about 20-25 minutes” before he was moved to the hospital, Keir Radnedge, a columnist at World Soccer Magazine, told CNN Saturday.

“This was towards the end of extra time in the match. Suddenly, colleagues up to my left started shouting for medical assistance. Obviously, someone had collapsed. Because the chairs are freestanding, people were able to move the chairs, so it’s possible to create a little bit of space around him,” Radnedge said.

He added that the medical team were there “pretty quickly and were able to, as best they could, give treatment.” The circumstances around his death are not clear.

“The entire US Soccer family is heartbroken to learn that we have lost Grant Wahl,” US Soccer said in a statement on its official Twitter account. “Grant made soccer his life’s work, and we are devastated that he and his brilliant writing will no longer be with us.”

US Soccer praised Wahl’s passion and “belief in the power of the game to advance human rights,” and shared its condolences with Wahl’s wife, Celine Gounder, and his loved ones.

Gounder also posted the US Soccer statement on Twitter.

“I am so thankful for the support of my husband Grant Wahl’s soccer family and of so many friends who’ve reached out tonight. I’m in complete shock,” wrote Gounder, a former CNN contributor who served on the Biden-Harris transition Covid-19 advisory board.

US State Department spokesperson Ned Price said the department was in “close communication” with Wahl’s family. The World Cup organizers also said they were in touch with the US embassy “to ensure the process of repatriating the body is in accordance with the family’s wishes.”

Wahl had covered soccer for more than two decades, including 11 World Cups — six men’s, five women’s – and authored several books on the sport, according to his website.

He had just celebrated his birthday earlier this week with “a great group of media friends at the World Cup,” according to a post on his official Twitter account, which added: “Very thankful for everyone.”

Wahl’s death has sent shockwaves through the soccer and sports journalism community, with many sharing tributes on social media.

“Only some days ago, Grant was recognized by FIFA and AIPS (the International Sports Press Association) for his contribution to reporting on eight consecutive FIFA World Cups,” said FIFA President Gianni Infantino in a statement.

Infantino and FIFA media director Bryan Swanson were at the hospital on Saturday to offer any kind of support needed for the family, friends, and the journalists who were also his housemates in Qatar.

The co-editors in chief of Sports Illustrated, the publication where Wahl spent the majority of his career, said in a joint statement they were “shocked and devastated at the news of Grant’s passing.”

“We were proud to call him a colleague and friend for two decades – no writer in the history of (Sports Illustrated) has been more passionate about the sport he loved and the stories he wanted to tell,” said the statement.

It added that Wahl had first joined the publication in November 1996. He had volunteered to cover the sport as a junior reporter – back before it reached the heights of global popularity it now enjoys – eventually becoming “one of the most respected soccer authorities in the world,” it said.

The statement said that Wahl also worked with other media outlets including Fox Sports. After leaving Sports Illustrated in 2020, he began publishing his podcast and newsletter.

On Friday in Philadelphia, basketball star LeBron James said he had been “very fond of Grant.” While Wahl was at Sports Illustrated, he did a cover story on James when James was in high school.

“I’ve always kind of watched from a distance even when I moved up in ranks and became a professional, and he went to a different sport,” said James, speaking at a postgame press conference. “Any time his name would come up I’ll always think back to me as a teenager and having Grant in our building … It’s a tragic loss.”

“A talented journalist, Grant was an advocate for the LGBTQ community & a prominent voice for women’s soccer,” King tweeted Saturday. “He used his platform to elevate those whose stories needed telling. Prayers for his family.”

Other current and former US soccer players, including Ali Krieger and Tony Meola, shared their condolences, as did sporting bodies such as Major League Soccer and the National Women’s Soccer League.

Wittyngham, Wahl’s podcast co-host, told CNN on Saturday the news of his death had been hard to fathom.

“For Americans, Grant Wahl is the first person you read covering soccer. He was kind of the only person for a while … Grant was the first person who really paid genuine attention to this sport in a meaningful way,” Wittyngham said.

Several journalists shared stories of reporting alongside Wahl, and having encountered him at multiple World Cups over the years.

“Before he became the best covering soccer he did hoops and was so kind to me,” wrote famed broadcaster Dick Vitale.

Timmy T. Davis, the US Ambassador to Qatar, tweeted that Wahl was “a well known and greatly respected reporter who focused on the beautiful game.”