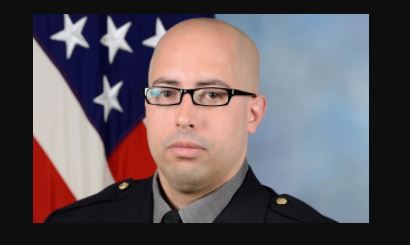 Senior Officer George Gonzalez of Brooklyn, New York, has been identified by the Pentagon Force Protection Agency as the Pentagon police officer killed during yesterday’s violent incident on the Pentagon bus platform. Gonzalez, 37, was a three-year veteran of the Pentagon Police, according to the PFPA.

He was a veteran of both the military and law enforcement. Before joining the PFPA, González served in the Federal Bureau of Prisons and the Transportation Security Agency, according to a press release from the PFPA. González also served in the Army, earning an Army Commendation Medal for his service in Iraq.

González served as a member of the cannon crew (13B) in the Army from April 2003 to November 2005, and in the Army Reserve from November 2005 to March 2011, according to the Army. He was deployed to Iraq from August 2004 to July 2005. He was a sergeant when he left the service. González’s awards and decorations include the Army Commendation Medal and the Combat Action Badge.

He joined the PFPA as a police officer on July 22, 2018. In just over three years of service with the Pentagon Police, González was promoted twice, reaching his final rank of a senior officer in 2020.

“We are heartbroken over the death of our son and brother, but we are very, very proud of the life he lived. George dedicated his life to serving his country; first in the military, and then as a law enforcement officer, he continued to serve protecting service members and citizens of this country, ”his family said in a message posted on the PFPA Twitter account. “He had an infectious personality and his family and friends loved him fiercely. He loved his country, his family, and the Yankees. He was one of the good guys with a big heart and we will always miss him. We ask that you respect our privacy as we deal with the sudden and tragic loss. ”

Austin William Lanz is a man from Acworth, Georgia, who was identified as the suspect charged with stabbing and killing a Pentagon police officer at a subway station just steps from the Pentagon on Tuesday, Aug. 3, 2021, law enforcement sources said. it’s a statement. . Lanz stabbed Officer George Gonzalez before he was shot and killed, The Associated Press reports.

The FBI issued a statement the day after the incident saying Lanz shot himself with González’s gun. At least one other person was injured, but officials did not say how the injury occurred. That person was released from the hospital, the FBI said.

González was a decorated US Army veteran who served in Iraq and earned the Army Commendation Medal. He joined the Pentagon’s Force Protection Agency in 2018, where he rose through the ranks. He was promoted to senior officer in 2020, according to a statement from the PFPA.

The Pentagon is the headquarters of the US Army in Arlington, Virginia, located near Washington, DC Police allege that Lanz attacked the Pentagon police officer and stabbed him on the Metrobus platform in front of the Pentagon subway station around 10:30 am. the Pentagon.

Less than two hours after the stabbing, he lifted the lockdown. The head of the Pentagon’s Force Protection Agency, Woodrow Kusse, held a brief press conference four hours after the incident and said there was no threat to the public. Very few details were released at the time.

Lanz stabbed González before shooting himself

The FBI released a statement on the afternoon of Wednesday, August 4, 2021, saying that Lanz shot himself with González’s service weapon after fatally stabbing González. Another person suffered non-life-threatening injuries, according to the FBI.

At approximately 10:40 a.m. On Tuesday, August 3, an individual exited a bus at the Pentagon Transit Center in Arlington, VA, and immediately, without provocation, attacked [PFPA] Officer George González with a knife, seriously wounding him.

A fight ensued in which the subject fatally wounded Officer González and then shot himself with the officer’s service weapon. Other PFPA officers became involved with the subject, who eventually died at the scene.

The deceased subject has been identified as Austin William Lanz, 27, most recently of Acworth, GA. The FBI continues to investigate the incident.

The Associated Press reported that Lanz “ambushed” González, citing sources who said Lanz “ran up to him and stabbed him in the neck.

The Washington Post reported that Kusse “repeatedly deflected journalists’ questions about what had happened” in the incident during the Tuesday afternoon press conference, but said “there were several injuries as a result of the incident.”

Early reports indicated that the suspect may have entered a railroad car and could be heading north toward Maryland, but authorities later said the suspect was shot and killed at the scene. Some reports also indicated that a manhunt was underway for a suspect wearing a white T-shirt with a red stain. Kusse said that some of the early reports were inaccurate.

FOX 5 News reported that at the time of the incident, Defense Department employees received an electronic warning on their computers and heard an overhead announcement telling all Pentagon personnel to stay indoors due to police activity.

The PFPA issued a statement regarding the downed officer. He said:

Last night, the Pentagon Force Protection Agency observed the end of the watch for Pentagon police officer George Gonzalez, who was tragically killed yesterday during the incident on the Pentagon bus platform. Born in Brooklyn, New York, he was a fan of the Yankees. He graduated from Canarsie High School in New York City.

George González joined the [PFPA] as a police officer on July 22, 2018. As a Pentagon police officer, he took seriously our mission to “protect those who protect our nation.” He was promoted twice and achieved the rank of Senior Officer in 2020. A gregarious officer, he was well-liked and respected by his fellow officers.

As a military and law enforcement veteran, Officer Gonzalez had previously worked for the Federal Bureau of Prisons, the Transportation Security Administration, and the United States Army. He was awarded the Army Commendation Medal for his service in Iraq.

Officer González embodied our values ​​of integrity and service to others. As we mourn the loss of Officer González, our commitment to serve and protect is stronger.

Officer González’s family is in our thoughts and prayers. May he rest in peace.

The Associated Press reported that Lanz enlisted in the US Marine Corps in October 2012. But, according to the Corps, he “was administratively separated less than a month later and never earned the Marine title.”

Metrorail Info issued statements alerting passengers to diverted traffic around the Pentagon, delays, stations closed and other changes in service due to the police investigation. Law enforcement agencies searched trains, investigating the possibility of a suspect entering a carriage, early reports indicated.

Defense Secretary Lloyd Austin and General Mark Milley, Chairman of the Joint Chiefs of Staff, were meeting with President Joe Biden at the White House when the shooting occurred, according to WBALTV.

The news outlet reported that in 2010, two officers from the Pentagon’s Force Protection Agency were injured when a gunman, later identified as John Patrick Bedell, approached them in a security check area. Officers returned fire, killing Bedell. The policemen survived his injuries.

Lanz was arrested and charged

Court records in Cobb County, Georgia indicate that Lanz was arrested in April 2021 and charged with burglary and robbery. On the same day, a series of charges were brought against him, including two counts of aggravated battery against the police, one count of terrorist threat and one count of disturbance in a penal institution, according to court records.

Lanz’s court records show that a judge lowered the amount of his bail to $ 30,000 in May 2021, setting conditions that included banning him from using illegal drugs and ordering a mental health evaluation. The case was still pending when Lanz died, court records show.

Freelance journalist Dave Statter was in the area when he heard gunshots at the subway station and saw a body on the ground, he wrote on Twitter. He shared videos of the scene, which showed Pentagon police attempting to revive two victims who were shot on the upper level of the transportation station.

“This video is at 10:49 am as Pentagon police work with the two people near the Metrobus at the Pentagon transit center,” he wrote on Twitter.

Statter told ARLNow.com that he heard “at least a dozen shots.” He shared a video showing police covering a body with a white sheet near a Metrobus and officers surrounding another person with weapons in hand.

Two Associated Press reporters were in the area at the time and one reported hearing multiple shots, followed by a pause and then at least one additional shot. Another reported hearing police yell “shooter.”

Reporters described a grim scene when law enforcement officers gathered outside George Washington University Hospital, where González was taken after being fatally stabbed in the Aug. 3 incident. The police saluted and escorted the fallen officer.

“Grim moment outside GW University Hospital, where sources tell us a police officer was taken away after some kind of attack outside the Pentagon,” wrote reporter Brian Sasser on Twitter.

Victoria Sánchez of 7News DC also described the scene outside the hospital.

“A solemn sentiment at the Pentagon,” she wrote on Twitter. “We do not officially know that an officer died, but the police escort is a tradition and a sad sign that someone from the police has died.” Defense Secretary Lloyd Austin later issued a statement and said the flags would be flown at half-mast at the Pentagon in tribute to the fallen officer.

“This fallen officer died in the line of duty to him, helping to protect the tens of thousands of people who work and visit the Pentagon on a daily basis,” his statement said. “This tragic death today is a stark reminder of the dangers they face and the sacrifices they make. We will always be grateful for that service and the courage with which it is provided ”.

The FBI leads the investigation

Investigators have yet to release any information about the motive for the shooting. The FBI is leading the investigation, officials said at a news conference. The Associated Press reported that to determine a motive, investigators were looking into Lanz’s background and any history of mental illness to determine “some reason he might want to target the Pentagon or police officers.”

The shutdown at the Pentagon lasted for about two hours before the Defense Department issued a statement saying the area was safe but it was still a crime scene.

“The scene of the incident is safe. It is still an active crime scene, ”the Pentagon’s Force Protection Agency wrote on Twitter. “We request that everyone stay away from the Metro train entrance and the bus platform area. Transportation at the Pentagon is diverted to Pentagon City. ”

Minutes later, the DOD agency wrote on Twitter that the blockade had been lifted.

“The Pentagon has lifted the blockade and reopened,” the statement said. “Corridor 2 and the entrance to the subway remain closed. Corridor 3 is open for pedestrian traffic ”.