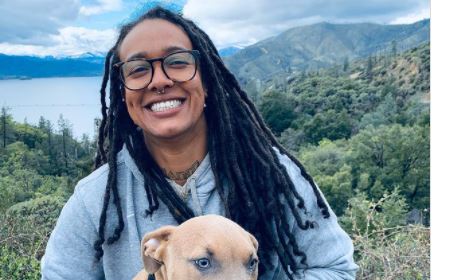 Dominique Veasley is a Black woman who was subjected to an abhorrent display of bigotry when a group of White women expressed their distaste when kissed her partner at the poolside in Kimpton Sawyer Hotel, a popular Sacramento hotel. The incident which was captured on Video and posted by the Black Bay Area Instagram account shows the women throwing expletives as they were escorted off the property of the Kimpton Sawyer hotel for their homophobia. People could be heard chanting “Shame” at these women as they made their exit.

Veasley said, “My, you know, initial reaction for the children was, oh, yeah. And then I was just like, wait, you’re asking me to stop being me.” She said that despite other straight couples in the pool showing the same level of affection, she and her partner were the only ones asked to stop kissing.

The group of women even called security on the couple. Veasley told the news network, “It would have been a beautiful moment for her to teach about love to her kids. But instead, she decided to se**xualize two women.”

But Veasley is not disheartened. She hopes this incident will ultimately serve as a lesson in acceptance. “Eventually, things are going to change as long as we keep pushing it. There’s no movement without movement,” she said, adding that she was grateful to the people who stood up for them, and hoped this episode would encourage others to become allies.

In the video, the group of what looked like White women could be seen being escorted away from the pool area by hotel security as hotel guests chanted “Shame” at them. One woman in a blue dress could be seen angrily marching off before stopping, looking into the camera, and raising her middle finger while loudly asking the person recording to “F*** off”.

When another woman, dressed in green, confronted the bystanders and asked them if they had any children, one person said that they don’t want children, to which she replied, “Good because you’d be a f***ing terrible dad.”

The woman then claimed that she had “never been more embarrassed” in her life “for the human race” and said that she was a “Jewish woman from New Jersey” who also lives in Oakland. She then continued a profanity-filled tirade even as her male companion pointed out that there were still children present in the pool area.

Nikki Carlson, general manager at The Sawyer, released a statement following the incident, saying: ‘The Sawyer does not condone discrimination or verbal assault of any kind. An unfortunate disagreement between guests occurred at our pool over the holiday weekend and the matter has since been resolved.”

A popular Sacramento hotel recently witnessed an abhorrent display of bigotry when a group of White women expressed their distaste when a Black queer woman kissed her partner at the poolside. The Black Bay Area Instagram account uploaded a video of the offended women throwing expletives as they were escorted off the property of the Kimpton Sawyer hotel for their homophobia. People could be heard chanting “Shame” at these women as they made their exit.

The Instagram account described the events in the caption, writing: “Happened yesterday in Sacramento at the Kimpton hotel pool. A pack of white straight women in a cabana demanded that a queer Black woman (Dom Veas of Oakland) to stop kissing her girlfriend in the pool because ‘there were children present!’.”

The caption further said, “Of course there were many other (straight/white) couples in the pool with plenty of PDA, but they only insisted that only black queer women stop. And we know why.” When confronted by bystanders, the women claimed there’s no way they were racist because one of them was supposedly Hispanic, the account claimed.