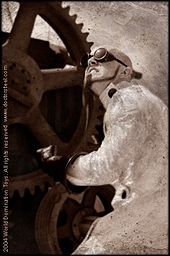 Rion Vernon, known by his stage name Doctor Steel (full name, Doctor Phineas Waldolf Steel) is an American musician and internet personality from Los Angeles. He performed on rare occasions with a “backup band”, claiming that a fictitious robot band had malfunctioned. Shows incorporated puppetry, multimedia and performances by female members (“Nurses” and “Scouts”) of his street team, The Army of Toy Soldiers. Steel made a brief appearance on The Tonight Show and has had numerous interviews. He was the subject of an article in Wired magazine regarding allegations that Dr. Horrible had copied his style. Steel has frequently been cited as an example of steampunk music.

Steel began publicly performing in 1999, essentially busking on the streets of Los Angeles. A few years later, he began performing at venues like The Key Club and the California Institute of Abnormalarts. His live shows combined music with puppetry and video projection that reflect the stories and meanings of the songs.

The albums Dr. Steel and Dr. Steel II: Eclectic Boogaloo were released digitally in 2001, followed by People of Earth in 2002.[citation needed] The Dr. Steel Collection (2004) was Steel’s first CD release, featuring several previously released tracks, some slightly altered. The Dr. Steel Collection also features the track “Land of the Lost,” about the 1970s version of the show by the same name. Some attempts were made to get the song into the soundtrack of 2009 movie version of Land of the Lost, but they were unsuccessful.

Steel’s second CD release was The Dr. Steel Read-A-Long Album (2006). It was a limited distribution and quickly sold out. The album art included a recreation of the sleeve of read-along records, and the disc design resembled that of a vinyl record. In 2007, Steel re-released the first three albums, once again in digital format.

Steel’s music can often be heard on a number of steampunk radio broadcasts that stream worldwide, such as The Clockwork Cabaret. His song “Boogieman Boogie” was also included in a compilation of steampunk music released by Gilded Age Records.

This attracted the attention of national media and was reported in Coilhouse and also Wired magazine, in which Dr. Horrible co-writer Maurissa Tancharoen responded, “All we have to say on the subject is we’ve never heard of Dr. Steel before.” “There’s room for everyone in this party,” she added.

The Army of Toy Soldiers (formerly Dr. Steel’s Army of Toy Soldiers; also known as Toy Soldiers Unite after the name of their website) was originally Dr. Steel’s fan club and street team, and played into the Dr. Steel fiction, in that it was allegedly a tool in his plan for global domination. The Army considers itself a movement for social change, and since Steel’s retirement it has begun to distance itself from Steel, but continue as an organization dedicated to promoting fun and its members’ creative endeavors.

The website for the organization, referred to playfully as the “digital bunker”, was created by the then head of Dr. Steel’s fan club, steampunk model and fashion designer Kate Lambert, aka “Sergeant Kato”, in 2006. After Steel’s retirement, Kato turned over the site to its current administrators, and most information regarding Steel was moved to an archive site.