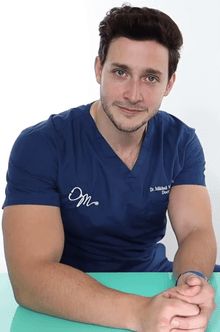 Mikhail Varshavski (Russian: Михаил Варшавский; born November 12, 1989), known professionally as Doctor Mike, is a Russian-born American Internet personality, family physician, and professional boxer. His Instagram account went viral after he was featured in BuzzFeed and People magazine named him The Sexiest Doctor Alive in 2015. He has a YouTube channel for medically-themed entertainment and information.

Varshavski was born on November 12, 1989, in Saransk, Russian SFSR, to a Jewish family. His father, both Jewish and Ukrainian, was a physician and a graduate of the Third Medical Institute of Moscow, while his mother was a mathematics professor. When he was six, he and his family immigrated to Brooklyn, New York. In Brooklyn, his mother worked sweeping floors for minimum wage, while his father attended medical school for the second time

Varshavski was given the nickname “Doctor Mike” during his high school years by friends who came to him for sports-related injuries. After seeing his father’s relationship with his patients, Varshavski wanted to become a doctor. He enrolled in the New York Institute of Technology and was accepted for an accelerated, seven-year combined track for a bachelor’s degree in life sciences and a medical degree (Doctor of Osteopathic Medicine) upon completion of the undergraduate program. In 2014, he started residency at Atlantic Health System’s Overlook Medical Center’s Family Medicine program, which he completed in 2017. During his first year in the program, his mother died of leukemia, and he decided to move back in with his father.

In early 2012, Varshavski joined Instagram to document his life as a medical student and combat the notion that “you can’t have a life in medical school”.

Varshavski gained media attention in August 2015 when BuzzFeed published an article about him titled “Um, You Really Need To See This Hot Doctor And His Dog” that highlighted his good looks and his relationship with his dog, a husky named Roxy. That November, People magazine named him “the Sexiest Doctor Alive” in its Sexiest Man Alive issue, popularizing his Instagram account.

In 2017, a year after he launched his YouTube channel, Varshavski gave a TEDx Talk on “The epidemic of the ‘I Know It All’ expert” at a TEDxMonteCarlo event. The video of that speech has been viewed more than 3 million times. In 2018, after his residency, he joined Chatham Family Medicine, a family practice with Atlantic Health System, in Chatham, New Jersey.

Varshavski made his amateur boxing debut in May 2022 against influencer iDubbbz as the headline fight in the Creator Clash boxing event. He won his match against iDubbbz in a unanimous decision.

Varshavski made his professional debut against Chris Avila on the undercard of Jake Paul vs. Anderson Silva. He lost the fight via unanimous decision.

In late 2015, Varshavski established a foundation, Limitless Tomorrow, to provide scholarships to students, and he has raised money for it by auctioning experiences with himself through his social media accounts. In January 2016, the dating app Coffee Meets Bagel collaborated in a $10 raffle for a date with Varshavski; the campaign raised $91,000 for his foundation.

In July 2019, Varshavski spread awareness for the humanitarian organization, Save a Child’s Heart, by posting a photo with the organization’s 5,000th patient while on a trip to Israel.

In March 2020, Varshavski donated $50,000 worth of N95 masks in the face of shortages for medical personnel due to the COVID-19 pandemic.

In late March 2022, Varshavski set up a donation to GlobalGiving for Ukrainian people during the Russian invasion of Ukraine. In June 2022, Varshavski donated $100,111 to Feeding America, through a fundraiser organized by YouTuber Ryan Trahan.

Varshavski won the 2020 Webby Awards for Education & Discovery, as well as for Health & Fitness in the category Social.