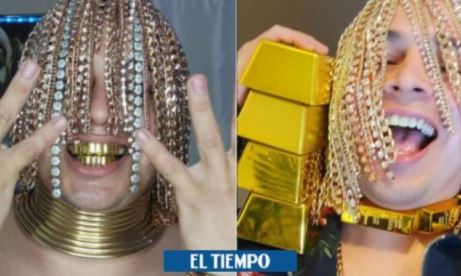 A Mexican rapper named Dan Sur is no stranger to such changes. He took social media by storm recently when photos of him went viral where he sported golden chains falling like strands of hair across his face. The 23-year-old artist replaced his natural hair with golden locks that were surgically implanted into his scalp. Sur shared the photos and video with his new look on his Instagram and TikTok pages.

“The truth is that I wanted to do something different because I see that everyone dyes their hair. I hope not everyone copies me now, ”he said in one of the TikTok videos that he shared with his 1.9 million followers on the streaming platform. The striking artist reportedly underwent the bizarre hair replacement procedure, which involved dozens of gold chains, some encrusted with jewels, in April.

Attention-hungry rapper-reggaeton star Dan Sur has adopted an extreme look that is sure to fill even the most diehard hip-hop fans with dread. This 23-year-old Mexican goldilocks claims he’s the “first rapper … in human history” to rock an assortment of gold chains as “hair” — hanging from hooks he had surgically implanted into his scalp.

“I have it as a hook that is implanted in my head and that hook has hooks and they are all hooked in my skull, under my skin,” Sur said in another viral clip. “This is my hair. Golden hair. The first rapper to have gold hair implanted in human history.”

Some media outlets have proffered that Sur was inspired by rapper Lil Uzi Vert, who went viral earlier this year when he hyped spending $24 million on a “natural” pink diamond he had embedded into his forehead.

Of course, that didn’t turn out so well: Vert, 26, now claims a fan ripped the precious gem out of his face at the Rolling Loud music festival in July but says he was able to jump into the crowd and retrieve it. “I’m feeling good,” he told TMZ. “I still have the diamond, so I feel good.”

Despite the jewelry-juiced comparisons, Sur actually considers himself quite unique: “The truth is that I wanted to do something different because I see that everyone dyes their hair,” he said in one clip. “I hope not everyone copies me now.” Meanwhile, a deep dive into Sur’s Instagram page uncovers the more traditional look he used to sport back in 2019 before his unusual hair-replacement procedure: