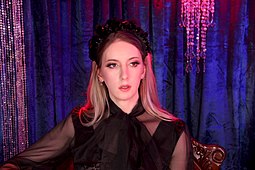 Natalie Wynn (born October 21, 1988) is an American YouTuber, political commentator, and cultural critic. She is best known for her YouTube channel, ContraPoints, where she creates video essays exploring a wide range of topics such as politics, gender, ethics, race, and philosophy.

Her videos often provide counterarguments to right-wing extremists and classical liberals and talk about modern social issues such as class inequality, LGBTQ rights (particularly trans rights), cancel culture, and modern internet culture. Her videos have received widespread media coverage for their intricately designed sets and costumes and for their darkly humorous tone, which has led The Verge to call her “the Oscar Wilde of YouTube”. In recognition of her videos, Wynn won a Streamy Award for “Commentary” in 2020, and was nominated in the same category at the 2021 Streamy Awards.

Wynn was born on October 21, 1988, in Arlington, Virginia, and raised in the same state Her father is a psychology professor and her mother is a doctor. After studying piano at Berklee College of Music, she attended Georgetown University and studied philosophy, then enrolled at Northwestern University to pursue a PhD in philosophy, also serving as an instructor. She left Northwestern with a master’s degree, saying, “The idea of being an academic for the rest of my life became boring to the point of existential despair,” and moved to Baltimore, Maryland for a relationship, which ended up failing. After quitting her PhD program, Wynn taught piano, and worked as a paralegal, Uber driver, copywriter, and would-be novelist, eventually deciding to begin making video responses to the alt-right and Gamergate on YouTube.

Wynn started publishing YouTube videos in 2008, initially focusing on criticism of religion and her position as an atheist and skeptic. In 2016, she began the ContraPoints channel in reaction to the Gamergate controversy and the increasing prevalence of right-wing YouTubers, shifting her content to countering their arguments. Early ContraPoints videos also covered subjects such as race, racism, and online radicalization.

In her videos, Wynn utilizes philosophy and personal anecdotes to not only explain left-wing ideas, but to also criticize common conservative, classical liberal, alt-right, and fascist talking points. Wynn’s videos often have a combative but humorous tone, containing dark and surreal humor, sarcasm, and sexual themes. She often illustrates concepts by playing different characters who debate one another. The videos have been noted for her production choices such as dramatic lighting, elaborate costumes, and vibrant aesthetics. She borrows some aesthetic cues from drag performance, joking in a 2019 interview that if conservatives were going to call her a drag queen anyway, she might as well “be the most extravagant drag queen on YouTube.” In a 2018 interview for The Verge, Katherine Cross notes a significant difference between Wynn in-person and how she presents on YouTube, explaining that the YouTube channel portrays an image of being “blithe, aloof, decadent and disdainful”, whereas personally Wynn “can be earnest—and she cares deeply, almost too much.”

The video channel is financed through the crowdfunding platform Patreon, where Wynn has been among the top 20 creators on the site. As of May 2022, Wynn had about 11,000 Patreon supporters.

Wynn is a transgender woman, a matter prominently featured in her videos; she began her gender transition in 2017. She previously identified as genderqueer. She is a feminist and has called herself a democratic socialist and social democrat. She endorsed Bernie Sanders in the 2020 Democratic presidential primaries and supports Alexandria Ocasio-Cortez. As of 2017[update], she resides in Baltimore, Maryland. In 2020, she came out as a lesbian in her video “Shame”.

The following list of ContraPoints’s videos includes only the ones which are still accessible on the ContraPoints YouTube channel. In February 2020, Wynn set all her videos from before August 2017—when she began her gender transition—to private, stating that they “no longer represent the person I’ve become”. She posted transcripts of the majority of these older videos on her website.