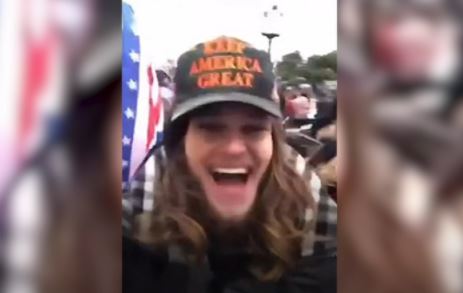 Christian Kulas appeared in U.S. District Court on Tuesday afternoon. He spoke only to answer a judge, who ordered that he will be released to his mother. Kulas’ face and a video clip have been plastered all over social media for five months. The North Shore man wore a modified MAGA hat reading “Keep America Great,” and posted smiling selfies from the day of the siege.

A number of websites have latched onto the pictures since then, wondering why Kulas hadn’t been arrested, but he was at his family’s home in Kenilworth early Tuesday morning. He is charged in Washington DC with unlawful entry to a restricted building and disorderly conduct on Capitol grounds, both misdemeanors.

He appeared before a judge today and will be released to his mother who lives in Kenilworth. @cbschicago pic.twitter.com/kZqi9NdVRp

Kulas graduated from Lake Forest High School in 2015. He is one of more than 465 people charged in the insurrection.

The Capitol riot, of course, took place during a joint session of Congress to certify the vote count for the Electoral College of the 2020 Presidential Election.

In a complaint, federal prosecutors said three days after the insurrection, the FBI received multiple tips that Kulas had been captured in images and video during the insurrection. The FBI interviewed several people, and a cooperating witness provided video clips from an Instagram account first showing a rally at which President Donald Trump was speaking, then people walking up the steps of the U.S. Capitol and shouting, “Block the steal!”

The camera then pans around to show a man identified by authorities as Kulas who had been operating the camera the whole time. He is seen laughing in the video, wearing a dark baseball-type cap with the words “Keep America Great” in bright orange letters, and a dark Burberry coat.

Another video clip from the Instagram account shows the inside of the Capitol, and a man is heard saying, “Storming the Capitol.”

The FBI also talked to another informant who has known Kulas for several years and reported attending middle school and high school with him. The second informant was highly confident that the person seen in the Burberry coat was Kulas, and also said he was the one who was heard saying, “Storming the Capitol.” Other video footage from a variety of sources also appeared to show Kulas, including video taken by other rioters and official surveillance video, prosecutors said.

The FBI Instagram that prosecutors said Kulas used was linked to his mother, prosecutors said. Internet sleuths circulated the social media posts now linked to Kulas in the days following the insurrection. That brought CBS 2’s Charlie De Mar to kulas’ Kenilworth family home back in January. His mother wasn’t interested in talking then, and when we revisited on Tuesday, nobody came to the door of the sprawling multi-million dollar home.

De Mar did talk to another area resident on Tuesday.

Bowman said she is relieved that arrests continue to be made in what the Department of Justice expects to be one of its largest investigations. It shocks me that someone that seemingly affluent – and let’s go out on a limb and say educated — would believe all this craziness,” Bowman said.

Kulas signed a $4,500 appearance bond to be released from custody Tuesday – meaning that he does not presently need to pay anything, but he will owe the money if he violates the conditions of his bond. Among those conditions are that Kulas must surrender his passport and may not travel outside the Northern District of Illinois without pre-approval, and must cooperate with getting a DNA sample if required, among other stipulations. In particular, he must stay away from Washington, D.C. unless ordered to appear there in court or to consult with attorneys.

He also cannot possess a gun, use alcohol excessively, or use drugs unless prescribed. Kulas’ father also has two guns at home, which must be removed by Friday. In court, it was agreed that Kulas’ mother will supervise him to follow court orders.