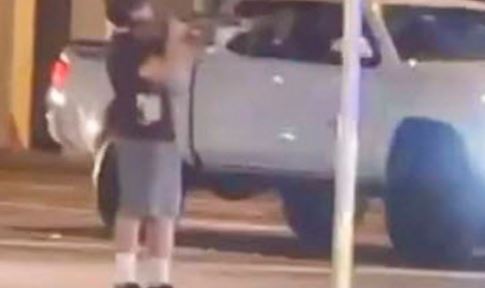 Alexander King was shot and killed by Florida police Saturday night after the teenager pointed what turned out to be an air pellet gun at cars and officers, authorities said. Police officers in Tarpon Springs, Florida fired 12 rounds at Alexander King after responding to Pinellas Avenue and Tarpon Avenue to multiple 911 reports of someone waving a “military-style rifle” at bystanders, Fox 13 reported, citing researchers.

King raised the air rifle and pointed it at the officers when they arrived, according to Tarpon Springs Police Chief Jeffrey Young. The teenager also appeared to be yelling “Shoot me,” according to a video of a witness to the encounter obtained by the news outlet. King was shot multiple times and taken to a local hospital, where he was pronounced dead. It is unclear whether he fired the pellet pistol.

Authorities revealed how a 17-year-old boy was shot and killed by officers after he pointed a “military-style rifle” at them while responding to reports that the boy was pointing at passing cars with what turned out to be a airsoft gun. Alexander King, of Tarpon Springs, Florida, was shot and killed by police at 9:30 p.m. on Saturday, October 16, following reports that he was waving a firearm at passing cars at the intersection of North Pinellas and Tarpon. The pellet-wielding teenager, who had had two previous felony arrests, raised his gun to police when two officers arrived on the scene, Tarpon Springs Police Chief Jeffrey Young said.

According to ABC Action News, the Tarpon Springs High School student had posted about the gun on his Instagram page on March 24. “New era airsoft Vietnam M14. I love it,” he wrote alongside a photo of the firearm. Police body camera footage shows officers approaching the intersection where King was scaring passing vehicles as he yelled “cover the area” and “get out of the car.” Young said in a statement how the “two officers, fearing for their own and the lives of others, fired multiple bullets each at the subject.”

According to the Tampa Bay Times, the two officers hid behind a car and fired at least 12 rounds, seven with a patrol rifle and five with a pistol, before handcuffing the teenager. Officers attempted to perform CPR on King until the first responders arrived on the scene. However, the handcuffed teenager was pronounced dead at 11:05 p.m. at Bayonet Point Hospital in Hudson, Florida, the New York Daily News reported.

It later emerged that King, who was identified on Monday, October 18, had had 22 run-ins with the law and it was determined that his weapon at the scene was a pellet rifle. According to the Daily News, the eleventh-grade student had two felony arrests: one for assaulting a school board employee in 2017 and aggravated assault with a deadly weapon in 2018. However, it was unclear if he ever was. convicted of the charges.

Young revealed that an internal investigation into the incident is currently underway to ensure proper protocols were followed. The police chief referred any questions to the FDLE, which is also conducting a separate investigation. Meanwhile, both officers involved were placed on paid administrative leave, per standard protocol, following a shooting involving officers. “Our thoughts and prayers are with Alex King’s family and friends,” Young offered. “Our thoughts and prayers are with the officers and their families as they, too, face the aftermath of this event.”

Tarpon Springs High School is providing counseling to all students in need after King’s death. “The Pinellas County Schools community is saddened by the passing of one of our students at Tarpon Springs High School,” school spokeswoman Isabel Mascarenas said in a statement. “The district’s Student Services team will provide grief counselors for students and staff in need of assistance. Our thoughts and prayers are with the student’s family and friends.”